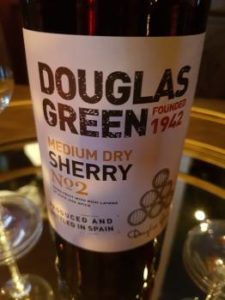 DGB has launched a range of authentic Spanish Sherry range sourced from leading producer Caballero and sold under the Douglas Green label consisting of a Pale Cream, Medium Dry and Cream Sherry, the wines designated No.1, No.2 and No. 3, according to time in barrel and hence colour. All perfectly drinkable, they have a recommended retail price of R130 a bottle.

On Friday, the 70th anniversary celebration of Douglas Green wines. Now owned by producer-wholesaler DGB,CEO Tim Hutchinson reported that the brand had become “too sterile” according to market research and...