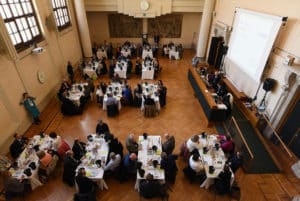 Judging for the 10th annual Concours Mondial du Sauvignon has just concluded. Run by Belgium company Vinopres, the business model behind this undertaking is smart – the organisers prevail on a different Sauvignon Blanc-orientated region of Europe each year to host the competition and this year proceedings took place in Udine, an important town in the northeast region of Italy known as Friuli-Venezia Giulia with over 1000 entries from 26 countries judged by some 70 wine professionals (this site’s editor and consultant Dr Carien Coetzee representing South Africa).

While Friuli is well known for its unoaked, fruit-driven white wines, Sauvignon Blanc is hardly of primary importance – total plantings are around 1 350ha making up some six percent of the total 23 500ha of the region’s vineyards. In comparison, South Africa has nearly 9 300 ha of Sauvignon Blanc out of a total of 94 500ha – hosting Concours Mondial du Sauvignon Blanc would be a good way to promote our offering from this variety to the world but who to bankroll it?

Results of this year’s competition will be announced on 17 March at Prowein in Germany.