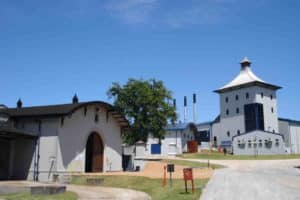 The James Sedgwick whisky distillery on the outskirts of Wellington dates from 1886. Today, it is the source of Three Ships Select, a blend of South African and Scotch whisky matured for three years, production amounting to a 1.5 million litres a year. It sells for R79 a bottle and is the seventh largest whisky brand in the country.

Distell are obviously bullish about whisky and an 18-month extension project which saw the construction of a new blending and fermentation cellars as well as a visitors’ centre has just been completed. Length of pipe laid 6.5km (weighing 52 tons); length of electrical cable 25km and length of instrument cable 30km. Distillery general manager Andy Watts won’t be drawn on how big the investment was except to say it was “significant”.

Who says Old Media is dead? Whisky is South Africa's latest niche title magazine, to be edited by Fiona McDonald, who used to head up Wine magazine. She will be...