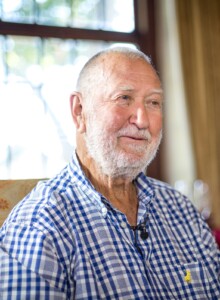 Francis (“Duimpie”) Bayly, one of South Africa’s most distinguished wine personalities, died yesterday of a heart attack at the age of 81.

Bayly held many leadership positions across the industry. In particular, he was for various periods chairman of 1) the South African Demarcation Committee of the Wine of Origin System which exists to delineate growing areas; 2) the Wine and Spirit Board’s technical committee; and 3) the SA National Wine Show Association, responsible for present both the SA Young Wine Show and Veritas Awards. He was one of the first people ever to earn the Cape Wine Master accreditation and he was a sought-after judge on many wine and brandy competitions.

As chairman of the Biodiversity & Wine Initiative, he spearheaded a partnership between the conservation sector and the wine industry established almost two decades ago that has since seen substantially more land rehabilitated to indigenous habitat than is cultivated to vines.

A resident of Stellenbosch, he is survived by his wife Sue, three children and grandchildren.

The first National Bottled Wine Show in South Africa was introduced by the South African National Wine Show Association in 1990 and renamed the Veritas Awards from 1991 making it...