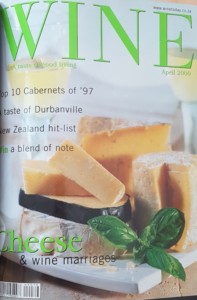 Some insight into SA wine’s recent history – this from the April 2000 issue of Wine Magazine:

The prize of a magnum of Dom Pérignon from Moët  & Chandon (then worth R1 400) for best letter to the editor went to Peter Gorst-Allman of Pretoria on the topic of the Cape Blend – extract as follows:

“Whether we need to go as far as planting vineyards of Mourvedre, Camenere, etc is a moot point. To search for a Cape Blend, available only in several decades, by planting numerous lesser know varietals… strikes me as economic suicide. Rather live with what we have, experiment with different blends, incorporating Pinotage, judge these at competitions and determine what the market will adopt.”

Three Paarl cellars – Fairview, Backsberg and Villiera (the latter subsequently Stellenbosch) were singled out as labels of choice by the British Labour Party on the strength of these wineries’ efforts to “uplift historically-disadvantaged communities”.

Category tasting – Cabernet Sauvignon
1997 was up for review, a vintage marked by cool weather and intermittent downpours and hence viticulturally challenging. The panel felt that there was a “cavernous gap between the too-early picked and the optimally ripe wines”.