“We are not simply tasting our library stock to see what’s in good enough shape to release commercially.  The objective is rather to share these older vintages with interested individuals. These are in fact part of our collective wine heritage and it would be a sin for us to allow it to deteriorate while it could have added intellectual value”, says Klein Constantia GM Hans Astrom.

Klein Constantia decided to unpack their museum stock in order to do just this, share the wines from previous vintages with those interested and to this end invited media, retail and sommeliers to discuss which wines could possibly be released in small batches, pending availability. 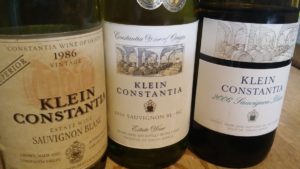 The first line-up was what I think is KC’s strength and much more acute palate Roland Peens of Wine Cellar next to me concurred: Sauvignon blanc. The 1986 was a showstopper.  Even though winemaker Matthew Day urged us politely to our seats in order to “taste her while she is still intact”, and understandably so, all present commented on her persistent freshness.  It was interesting to sample the ’86 after the tasting again and you wouldn’t guess it’s a Sauvignon blanc of that age – tasting it blind, I would’ve pegged it at five years old. It was just incredible.

In addition to the ’86, the ’96, ’03, ’08 and ’09 were also in the line-up, and during discussion, an important point was raised regarding the importance of educating the consumer on how well carefully matured South African white wines drink. This tasting again proved the point that our whites have the mettle to develop gracefully – across varieties. The trend towards a very green, pyrazine-driven style was obvious in the ’96 and this was obviously then toned down in the case of the ‘03 and ’06, with ’09 being the favourite along with a the “next level” ’86.  We need to cultivate a movement of keeping back some of our serious whites to mature and develop.  Similarly, palates need to develop, which will come with ongoing education via our sommeliers and educators.

Next up were the Rieslings with the ’94 being the favourite of the day – clearly a sommelier’s delight for food. Jennifer Huge from La Colombe excitedly describing her preferred dish. Then the Chardonnays. The KC Chardonnay was discontinued in 2010 for the grapes to be utilised for their MCC.  An interesting point raised was that the Reserve ’07 was markedly subdued, under cork, compared to the regular ’07 under screw cap, which showed more freshness.

When it came to the Pinot Noir line up, ’96 and ’01 provided an interesting contrast.  Given that I love Pinot and have done a few vintages in Vougeot at Domaine Bertagna, I was disappointed by the ’96 and more comfortable with the ’01.  The vineyard block has since been pulled out on KC but how the wines expressed themselves with time in the glass was interesting.  The ’96 to me had a distinct tomato character, worthy of no more than “Village” status while the ’01 showed typically forest floor, mushrooms and game bird as Giorgio dalla Cia, who served for such a long time at Meerlust, might have described it, but also not entirely what I personally expect from a Pinot.  Peens later referenced the ’96 to a Croze Hermitage and voila, if you changed your mind set to not expecting Pinot, yes, a much more delightful wine and still very much drinkable.

Concluding the line-up were the Cabernets, Marlbrooks and a Syrah, the stand out being the 1996 KC Marlbrook, a blend of 55% Cabernet Sauvignon, 40% Merlot, 5% Cabernet Franc.

You just have to commend Klein Constantia brains trust their foresight in maintaining such a well-stocked library and other local producers are also urged to do so going forwards.

“We’re 10 years in and only vaguely understanding the vineyards,” says Eben Sadie of Sadie Family Wines  as he welcomes guests to the latest vintage release.  And he reckons agricultural...

“Your yield from apples is six times more per hectare than from wine grapes.  If you don’t have a premium wine brand in Elgin, you should rather be farming apples”,...