Last night’s Cape Winemakers Guild technical tasting explored the topic of Cabernet Sauvignon vs Cabernet Sauvignon blends. Presented by Louis Strydom of Ernie Els Wines, the intention was to remind everybody of the greatness of the variety, even though plantings locally are in decline.

Four flights of three tasted blind as follows (my scores in brackets): 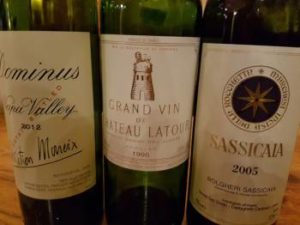 The best a man can get.

Some questions arising out of the tasting: Firstly, just how did Cabernet Sauvignon come to be the world’s most widely travelled dark-skin wine grape? It typically doesn’t give you that upfront burst of fruit of Merlot or Shiraz and is often overtly tannic.

On the issue of blending, it seems curious that the South African wine industry is today so wedded to the Bordeaux model. Prior to 1979, when Welgemeend were the first to release a local Bordeaux-style red wine, just about anything went. Shouldn’t local producers be blending to do justice to their terroir rather than aping a region from abroad? The magnificently drinkable (if not super-complex) Chateau Libertas 1970 is a reference here.

Lastly, there is no question that single-variety Cabernet Sauvignon is compelling but if greatness is to be achieved, then is some sort of blending a prerequisite? In conversation, Jan Boland Coetzee of Vriesenhof suggested to me that it depended how patient you were – straight Cab typically taking longer to come around than blends. The Latour 1996, however, far outshone anything else on the night but doesn’t really settle the matter, being so Cab-dominated, specifically 78% Cab, 17% Merlot, 4% Cab Franc and 1% Petit Verdot.

The Cape Winemakers Guild has three new members, namely Richard Kershaw, Erika Obermeyer and Alex Starey bringing total membership to 43 - Kershaw is the only Master of Wine who...