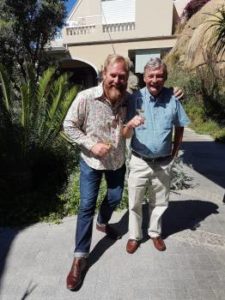 Niels Verburg and Brian Smith at the launch of the. Cabernet Franc 2014.

If part of the motivation on the part of Brian Smith of Elgin Ridge Wines and Niels Verburg of Luddite in launching the. Cabernet Franc 2014 at R15 000 per three-bottle case (see here) was to enliven the debate about local wine pricing, they’ve succeeded.

At the equivalent of R5 000 a bottle, it’s the second-most expensive current-release wine in the country behind 4G 67 Imizuzu at R5 600 a bottle. Many growers and producers seem delighted by these ambitious prices, consumers less so. What then is a fair price to pay for top-end wine?

The first point that needs to be made is that the price of grapes is not a major contributor to the retail price of a wine. One ton of grapes produces about 62,5 12-bottle cases of wine. Or 750 bottles. For the sake of argument, let’s assume our boutique producer is paying R10 000 a ton for the very finest Stellenbosch Cabernet Sauvignon or Hemel-en-Aarde Valley Pinot Noir. R10 000 for grapes divided by 750 bottles equates to R13.33 of the eventual price tag.

So what are growers constantly bleating about? Assuming our Stellenbosch or Elgin property yields six tons of grapes per hectare, this means that the farmer is getting R60 000 of income per hectare. Consider that an apple farmer gets around R300 000 of income per hectare depending on the variety under cultivation and a citrus farmer gets R800 000 and you can quickly work out who’s going to be driving a current-model Toyota Hilux and who’s not. The margins in wine grape farming are minimal and the on-going rationalization of the national vineyard which has seen total hectarage drop from 102 146ha in 2006 to 95 755ha in 2016 is only set to continue.

So are Smith and Verburg to be applauded for smashing through the glass ceiling that applies to SA wine pricing? It appears to this commentator that no matter how dire the SA wine industry’s situation is, growers and producers should proceed with caution. Making something in deliberately limited quantities and then charging a lot of money for it will be perceived by many as opportunistic and moreover might well have the consequence of distorting the market – we currently have a situation where SA wine is perceived as (ridiculously) good value but this could quickly be replaced by a situation where the top-end is perceived as over-priced.

Frankly, there must be quite a few established players who are unimpressed to see the launch of extravagantly priced wines with no track record. When you can get something like Meerlust Rubicon for £18 a bottle in the UK or Kanonkop Paul Sauer for ₤23 a bottle, asking over £250 a bottle for a new wine is perhaps foolhardy.

Getting SA wine prices up is ultimately a matter of supply and demand and it’s going to be a long and hard-fought process. Columella has a recommended UK price of ₤65 a bottle but it’s taken Eben Sadie 15 vintages to get there. Chris and Andrea Mullineux established their credentials with their standard-label Old Vines White and Syrah (currently selling for around ₤27 a bottle) before launching their Single Terroir wines (₤75 a bottle). There are no quick fixes and if you’re in wine production purely for the money, you’ve probably chosen the wrong career path.

Elgin Ridge, certified both organic and biodynamic, has been acquired by Radford Dale from founders Brian and Marion Smith. The couple purchased what was then a neglected apple farm in...

“The Chenin is an outlet for the geek in Niels [Verburg], allowing him to remember himself as a stamp collector,” reads the Luddite website concerning this Bot River wine and...