Although Cabernet Sauvignon has been cultivated in South Africa since at least the late part of the 19th century, the Cape Bordeaux Red Blend is a relatively recent phenomenon, Paarl winery Welgemeend producing the first in 1979. For those attempting to work within the idiom of Bordeaux, Merlot is often key and it would appear that this wasn’t widely planted until the 1970s – Overgaauw in Stellenbosch is credited with first varietal bottling in 1982.

Why the rise of the Bordeaux-style red blend? The 1970s and 1980s finally saw a reaction to the concentration of power that had prevailed in the wine and spirits industry until then – the introduction of Wine of Origin legislation in 1973 focused attention in South Africa on the potential of the individual property, rather than multi-regional, branded wine. Whereas low-price table wine made by large producer-wholesalers had long been the hallmark of the South African industry, there was now a movement towards quality. The authority that Bordeaux held in the world at large was an obvious reference point and such wines sprang up in an attempt to leverage that authority in a South African context – after Welgemeend, came Rubicon from Meerlust in 1980, Paul Sauer from Kanonkop a year after.

Perhaps an even more interesting question is: Why the continued predominance of the Cape Bordeaux Red? To an extent, it’s because of the proven success of such wines. Over time, Rubicon and Paul Sauer have been joined by De Toren Fusion V, Rupert & Rothschild Baron Edmund and the Series C and Series M from Vilafonté to name just a few examples.

Still, it’s a little curious that Cape Bordeaux Red Blends are so entrenched, especially given two not insignificant drawbacks, the first being that these wines are inevitably derivative and the second is that they typically include Merlot, a variety that has fundamental growing challenges under local conditions leading to a critical reputation that is generally less than stellar. 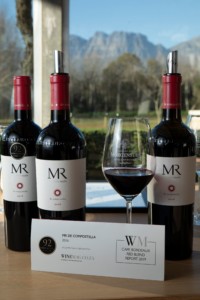 In the world of wine were supposedly authenticity is all, it might be considered unfortunate that so many of South Africa best producers feel compelled to ape a region in France in order to be taken seriously. Moreover, Cape Bordeaux Red Blends demonstrate that there are still stylistic divides with the ranks of South Africa’s fine wine producers, this genre very much the preserve of the Establishment. It’s is difficult to think of anybody who might even be vaguely construed as New Wave who chooses to make such a wine bar perhaps Bruwer Raats who turns out both the acclaimed MR De Compostella as well as some more unconventional offerings such as the Cape White Blend known as Harlem to Hope under the B Vintners label. Miles Mossop, too, has the Bordeaux-style Max to accompany his Cape White Saskia but for all his accomplishments during his previous tenure at Tokara, you wouldn’t have typically described his wines under that label as “radical”…

And yet, here we are. The New Wave may argue that all manner of varieties other than Bordeaux are better suited to local growing conditions but these conditions are fundamentally moderate (at least prior to the onset of climate change) and just about any variety grows well enough here so why not those that demand a premium in the market place?

Merlot may be fickle in the vineyard but it should be noted that it still manages to be South Africa’s eighth most widely planted variety with 5 371ha in the ground at the end of 2019. In addition, it may very well be that the best Merlot is most frequently used in blends rather than appearing as a single-variety wine (of course, the challenge is on to make a consistently good stand-alone Merlot, a challenge that the likes of Laibach in Stellenbosch and Shannon in Elgin have embraced). When contemplating South Africa’s very best red wines, then it seems that cheap talk and rhetoric don’t get you as far as money and Cape Bordeaux for many is where the money’s at.