Daisy Knowles: The importance of setting when it comes to drinking pleasure

To summarise three or four of your most memorable wine experiences when you are, shall we say, a regular partaker, is really quite tricky indeed. When not earning my bread and butter, I spend a large amount of time engaging in all things wine related – visiting the vast magnitude of wineries that the Western Cape boasts, attending food and wine events and then, most notably perhaps, drinking at home in the company of loved ones. I have a vast mental filing cabinet filled with special drinking experiences but I am a firm believer in your the playing a part in the enjoyment of wine as much as anything as will become clear below.

Two years ago, friends and I went on a Mediterranean cruise, predominantly around Italy. We embarked from Genoa and a firm decision was taken that we would buy a bottle of bubbly from each destination along the way, take it back to the ship and enjoy it on our balcony. The first wine to feature was Coste Alte Millesimato Extra Dry Prosecco, which happened to be bought in some quirky mini-supermarket that we found down a most unenticing alleyway in our port of departure. I couldn’t tell you at the time (unless I had consulted Google – but where is the fun in that when you’re experiencing all things local) how much TLC this bubbly had received in its making, or how little, but I know that it was one of the most refreshing, flavourful and moreish sparklies that I have tried. It was cheap as chips and pulled from the back of a low and dusty shelf. this couldn’t have been enjoyed anywhere better than floating along the Mediterranean. A gem to have found and it launched my enthrallment with Prosecco. 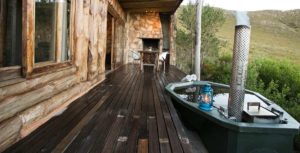 A wood-fired hot bath at KolKol.

In the region of Botriver lies the magical little place called Kolkol Mountain Lodge. I cannot be the only one who knows about its allure, as you now have to make bookings for the cabins up to a year in advance. On this occasion, we were a party of eight staying in the King Cabin two years ago to celebrate a milestone birthday of mine. It was June and freezing cold but there’s a hot pool on the deck (heated via a furnace, don’t get your drinking arm too close) and the memory of Muratie’s Lady Alice MCC (about R165 a bottle from the farm) transports me back us in our sans swim suits, up to our necks in warm water with the steam enveloping our glasses under a dark nightsky. A more serious bubbly than the Prosecco above, with crunchy fruit elements found hiding between layers of yeast and biscotti, but equally memorable in their own way.