Darling: Are we in a serious relationship or just a fling? 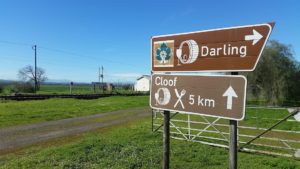 If terroir is everything, then how to understand the district of Darling? Named after the West Coast town of the same name, most wine enthusiasts will know it for Sauvignon Blanc from the higher-lying ward of Groenekloof but up until 2003, it was included in the Swartland and further inland there remain old-fashioned dryland bush vines – Ian Naudé’s much acclaimed Cinsaut comes from a Darling vineyard planted in the 1950s while Darling Cellars won the trophy for best Chenin Blanc at this year’s Old Mutual Trophy Wine Show from vineyards planted in the early 1980s.

Neil Ellis of Neil Ellis Wines recalls being impressed by the fruit quality that Darling offered while working as a youngster at KWV in the mid-1970s. “What tickled my fancy was that Darling grapes would come in later than most but used to produce this green juice that never oxidized.”

Ellis would go on to pioneer the négociant model in South Africa and his first vintage of Groenekloof Sauvignon Blanc was in 1991. The cool-climate possibilities of the area quickly became clear – the Pentz family of Groote Post, for instance, deciding to establish vineyard on their well-established dairy cattle farm around that time, now tending a total of some 100ha. Charles Back of Fairview and Spice Route is also convinced of the potential of this part of the world and now owns 135ha of vineyard including the Lanner Hill farm from which Cape Winemakers Guild member Nicky Versfeld made some acclaimed white wines.

There can’t, however, be a discussion about Darling without mention of Darling Cellars. Formerly the Mamreweg Co-operative established in 1948, it converted into a private company in 1996. Today, the cellar processes approximately 6 000 tons of grapes per year supplied by 17 growers who farm 1 000ha of vineyard. Head winemaker Pieter-Neil Rossouw says it’s the likes of the Bush Vine Sauvignon Blanc 2017 (R49 a bottle) and Chenin Blanc 2017 (R48) which keep the lights on but he’s keen to leverage the pockets of old vines he has access to, the Old Bush Vine Chenin 2016 as mentioned above selling for R158 and its counterpart the Old Bush Vine Cinsaut 2015 for R183.

Where the Darling proposition becomes difficult to understand is that Cabernet Sauvignon is the second most planted variety with 491ha out of a total of 2 632ha (Sauvignon Blanc is most planted at 514ha). Though KWV has tried to make an ultra-premium version of Cab under the Mentors label and Spier blends Darling with Stellenbosch to create its pretty smart Woolworths Reserve, it’s just about impossible to recall an absolutely breathtaking version of the variety from this part of the world, Groenekloof seemingly too cool, the rest of the district too hot for it to perform optimally.

Outside players farming for commodity wine also don’t necessarily help Darling’s cause. The district is home to Distell empowerment venture Earthbound (previously Tukulu) which, while worthy in concept, has never really scaled any great vinous heights; Anthonij Rupert Wyne also has vineyard here which is apparently farmed for its entry-level Protea label…

As to what will prevail in Darling, Neil Ellis reckons this is pretty much a matter of speculation. “Darling has huge potential. Fantastic soils and diverse topography. What varieties will work best? Sauvignon Blanc is obviously going to feature but you can’t build a business on it – you’re never going to gain a serious reputation with the variety however good for cash-flow it might be.  I suspect the Rhône varieties have a good future but we need entrepreneurial thinking. It’s dryland farming which means yields will never be too high. Growers must add value to what they do and that means creating brands.” Darling – a microcosm of the SA wine industry, then.