That’s six wines from 2015, three from the 2016 and one from 2013. Of the ten, the only wine to look a bit knackered was the Hermanuspietersfontein. Matured in oak, this greatly impressed back in 2016 but the subsequent three years don’t seem to have been kind to it… 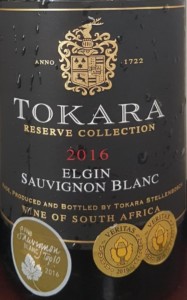 The stand-out wine was the Tokara on account of its depth and precision. Including a 5% portion fermented and matured for five months  in old larger format barrels, the nose currently shows green apple, lime and lemon, melon, some blackcurrant and a hint of flinty reduction while the palate was marked by extraordinary fruit concentration and zippy acidity, the finish long and pithy. This wine really does need some bottle maturation to show at its best – the 2007 vintage, for instance, rated 94 points in the 10-Year-Old Wine Report of 2017 and was still drinking beautifully earlier this year.

Also impressive was the De Grendel 2016 from own Durbanville fruit (whereas the companion wine Koetshuis sees grapes from various sites including Darling and Lutzville incorporated into the mix). On the nose, a dusty pyrazine-derived quality before lime and white peach while the palate was pleasantly lean with pure fruit, punchy acidity and a very dry finish. Drinking well now, it should equally go for another two or three years.

A pleasant surprise was the 2015 from Uitkyk, the Stellenbosch property that American company Eileses Capital subsequently acquired from Distell. Uitkyk was historically much better known for its red wines but this Sauvignon Blanc still looks rather special five years on from vintage, the nose showing citrus, white peach, a little pineapple and some fynbos while the palate is understated and balanced with seemingly moderate acidity and a gently savoury finish. The beauty of blind tastings is that they do unearth such unheralded wines as opposed to simply automatically approving the seeded players.

As for closure, the Cape Point Vineyards was under natural cork, the Almenkerk under agglomerate and the other eight under screwcap. It is unfortunate to have to report that the CPV, while not being spoilt outright, seemed just a little bit muted. Under competition circumstances, a professional taster would’ve been compelled to call for a second bottle which in all probability would present quite differently.

The rest of the line-up, while all more than sound in basic terms, spanned the stylistic spectrum from the quite severe Jordan The Outlier to the flamboyant and showy Nitida Golden Orb. They’ve all pretty much lost the extreme pungency and thrust of very young Sauvignon Blanc without becoming overly developed but should you still have them in your cellar, then my advice would be to consume them over the next 12 months. Five to six years from vintage appears to remain a good rule of thumb when it comes to getting the best out of SA’s white wines.

Whereas the first version of Dirty Little Secret Chenin Blanc by Ken Forrester was from the 2015 vintage, the second is a blend of the 2016 and 2017 harvests. Grapes...

Describing The FMC Chenin Blanc from Ken Forrester Wines in Stellenbosch as “distinctive” is a triumph of an understatement. It all began when 100 six-bottle cases of the maiden vintage...