How the Internet is set to change SA wine culture

However distasteful the practice of wine listing fees that restaurants attempt to extract from producers, we must conclude that the fact that it still exists, is because most consumers don’t care that the result is reduced choice when dining out – only those producers with sufficient marketing budget to pay the listing fees get listed and those who can’t or won’t are excluded.

At stake, is the issue of total addressable market – South Africa has a population of some 56 million but clearly not all citizens are consumers of fine wine. The vast majority will be excluded simply by lack of disposable income. The (very) small potential market left is then constrained by 1) a low level of involvement – choice of wine is a fairly low priority for most people; 2) risk aversion – a tendency to opt for something tried and tested rather than an alternative that is new and potentially unpalatable; 3) lack of convenience – exploring an overtraded market and stocking the household cellar is too time-consuming; and 4) price sensitivity – a failure to recognise a material improvement in quality the higher the cost of the wine.

Let’s just be clear about how small appetite for fine wine is in South Africa. Natural wine had a 16% share of the total alcoholic beverage market in 2015. SAWIS defines “super premium” as wine selling at prices above R32.00 per 750ml, all other wine (so called “premium” and “standard priced”) falling below that threshold.  In 2015, super premium made up 16% of the total of 383 million litres of natural wine consumed, the equivalent of 2.6% of the total market. What’s 16% of 383 million litres in bottles? It’s 81.7 million bottles. That’s right: fewer than 1.5 bottles costing more than R32 are consumed per head annually.

Meanwhile, pure alcohol consumption in South Africa was at 11.5 litre per capita per year in 2015, pushing us up to the third biggest drinking nation in Africa, and the 19th biggest drinking nation in the world, tied with Poland – clearly, we like a toot. It would appear, however, that the wine industry at all levels is not doing enough to penetrate into other sectors of the overall alcoholic beverage industry. Ask what radically new experiences are being created to attract new consumers and enable new use cases and the answer unfortunately has to be: Not very many. 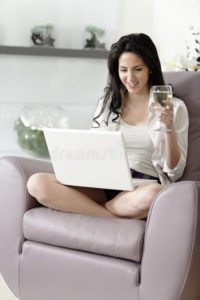 My contention is that the Internet is going to change this. When it comes to shopping, e-commerce has to be the way forward. To date, poor connectivity, on the one hand, and a lack of robust and well-developed shopping portals on the other, have constrained this. But broadband access continues to improve and the fact that online wine retail is so competitive (Cybercellar, Getwine, Norman Goodfellows, Port2Port, Wine Cellar, Wine of the Month Club not to mention the likes of Makro all fighting for a slice of the pie) means that service offerings must also get better – removing inconvenience from the wine shopping experience.

Online media meanwhile facilitates involvement – the winemag.co.za audience has grown by 210% from when we first started working on relaunching it as a purely digital entity at the beginning of 2014 until now (total users month to date: 22 159). Online media is also less elitist, content generators and users  afforded a far more intimate interaction than was the case with print media, conversations and idea exchanges able to happen in real time thanks to apps like Twitter and the comment sections on websites. This, in turn, builds trust between commentator and consumer thus leading to the latter becoming less risk adverse and more confident about trading up. And to return to where this article started out, consumers will also become less tolerant of crappy restaurant winelists.

Auction house Strauss & Co has announced that it has entered a joint venture with online wine merchant Wine Cellar, and sommelier-at-large Higgo Jacobs, to launch a fine wine auction...

When What I Drank Last Night (subsequently subsumed into winemag.co.za) ran the 10 Year Old Wine Awards in 2013, two of the 10 highest rated wines were from Morgenster in...