Aah, the joys of instant messaging. Planning happens on the go and schedules are plotted on a string of single words and the dial of the sun. “Sundowners?”… “Sure”… “Harveys?”… “Shot”… “17:30”. Hey man, if you are 30-something, instant messaging is the tool to use when you quickly needs to fill those unexpected lulls in the “high frequency” life. “Meeting got cancelled. G&Ts?”… “Hell yes”… “Harveys?”… “Fabulous”.

It is a tool which is used when a quick decision or answer is called for. It is not very ‘instant’ when you only reply two hours later, is it? So when I received a message this week indicating that I had to make a choice between two bottles of red wine, I was suitably distressed when I realised that it wasn’t a decision I could instantaneously make. 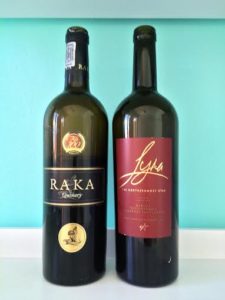 Which to use in the pot?

The message? “Which for the springbok?” followed by and image of Raka Quinary and a wine that I have never heard of called Lyra. The choice at hand related to the wine in which the springbok shoulder would be slow roasted and my initial reaction was to opt for the lesser known wine, but since you never cook with a wine you won’t drink, I argued that Raka would probably be the safer choice. I couldn’t decide. The wines simply had to be tasted before such a decision could be made and my friend was told to “hang 10”.

As both wines were Bordeaux-style red blends from the 2009 vintage, it also presented an interesting comparative tasting.

Lyra, it turned out, is produced up north by Orange River Wine Cellars. The blend consists of equal parts Merlot and Petit Verdot with 12% Cabernet Sauvignon. Considering that the Northern Cape is better known for bulk wine production than elegant unfiltered wines, Lyra was definitely a curiosity.

On the nose it showed bright red fruit and a slight hint of tobacco – sniffing it I immediately knew this wine was not to be scoffed at! When tasted, judicious use of oak and fine tannins confirmed this initial finding, contributing to the wine’s classy, and unexpectedly delicious, edge. Unfortunately, there is no more stock of the 2009 vintage at Orange River Wine Cellars, but the 2011 trades for R75 ex-cellar.

On the opposite side of the spectrum was the Quinary 2009, a blend of all five classic Bordeaux varieties made by Raka near Stanford, which failed to impress in the least. In comparison to Lyra’s medium bodied and well balanced palate, the Quinary tasted big, bold and heavy. Very ripe fruit and too much oak suggested that this wine would be tiring to drink. It was also the marginally more expensive of the two wines with it trading for R90 ex-cellar.

A glass of Lyra was added to the springbok shoulder, and the rest was happily consumed over dinner. The Raka Quinary was left untouched and served as a reminder that an instant decision is not always the right one.