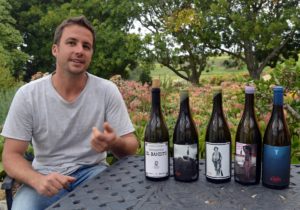 Craig Hawkins of Testalonga is this intangible mix of quirk and depth. Talking to him is like tumbling down the rabbit hole. You can’t quite put your finger on what he’s doing or how he’s doing it, but you know for sure you like it.

“We make wines that we want to drink, and then we find other people who want to drink them,” says Craig simply.

This Swartland winemaker has got what every brand marketer wants and what is impossible to cook up in a boardroom—authenticity. He’s just being himself, and following his senses down the rabbit hole, or in this case up into Bandits Kloof, a farm in the far north of the Swartland. “Our closest neighbour is a kilometre away,” he laughs. Craig lives here with his wife Carla (also a trained winemaker). They purchased the property a couple of years ago. And like the name suggests, it was wild, with no electricity and no vineyards. Fast-forward a couple of years and they now not only have light switches but are also planning to plant grenache and grenache blanc in 2018.

When wines are finally made from these grapes, they will augment a portfolio that practically sells out before release.

The majority of Testalonga’s wines are exported on allocation, with a small per cent leftover for the local market. Craig admits they’ve been lucky, and he hasn’t had to push too hard to sell the wines. Which is a good thing as he says: “I enjoy my peace and quiet, and doing things in my own time.”

Though he does enjoy traveling with his wines, and Japan in particular has struck a chord. “In Japan everything has a reason, it’s purposeful. The experience of trading there has definitely improved our wines.”

Testalonga currently produces around 50 000 bottles from grapes sourced and vinified exclusively in the Swartland. “We started with a barrel or two, now we have a few more…” The portfolio includes chenin (both skin contact and not), carignan, grenache, cinsaut, syrah, harslevelü, muscat, colombard and even some pinotage.

“My idea of terroir is simple: single grape, single soil. We bottle everything separately and we keep every vintage separate.”

It’s the soil he was first drawn to in any case, and then to the winemaking. Born in Natal, he says he was practically dragged to Cape Town by his family. He’s one of five siblings (four brothers and a sister). But like most up-country imports, he never left. After school his original plan was to get involved in nature conservation and forestry, but things changed while helping his older brother (also a winemaker) out in the vineyards. “I was pruning for beer money.” It was here he made the connection. “I saw the transformation of the grapes to the cellar. I had always wanted to farm, and this was the complete package.”

Neil who was then the winemaker at Hoopenburg (these days he’s making a name for himself in the cooler climate regions of Australia) was also instrumental in the next formative step. Over a beer (this is a recurring theme) Craig asked his brother who he thought was the most innovative winemaker in South Africa. His answer was Eben Sadie. So then and there Craig called him and asked him for harvest job, he said yes. He went on to work for him for five years.

In this period he spent six months of the year working harvests all over Europe, where he was inspired by “orange” wines (unheard of in South Africa at the time). So naturally—a first for his first: in 2008 he made his first wine a skin-contact chenin called El Bandito.

He then went on to work with his father-in-law at Lammershoek, while still making his own wines, before both he and Carla left at the end of 2014 to pursue their dream of owning an organic farm in the Swartland.

Organic farming has always been the only way for Craig. He remembers being frustrated by his academic studies. “There was just one page on organic farming in the entire textbook. This pushed me to do more research and discover more on my own.”

Craig says they have three employees who help out in both the vineyard and the cellar, and that both he and Carla are hands-on. “We’re farming,” he says emphatically. We have the choice to do everything ourselves and that’s how I want to live my life. Pruning, suckering, I’ll do it.”

Ever since that first “orange” wine, Craig has been the industry’s nominated Natural Wine King. It’s an association he’s not entirely comfortable with, he just wants to make wines he likes after all. That being said he does embrace the movement in South Africa and acknowledges not only his part in it, but what it’s done for him: “Natural wines have allowed me to buy a farm, a truck, a wedding ring.”

“You can say what you like about natural wines—you immediately know what you’re getting. Commercial wine making techniques can be used to hide bad qualities in your vineyards, whereas natural winemaking exposes poorer sites,” he says.

“It’s in my nature to search deeper. Less is important for me, I always ask myself; how far can I go?”