“Forklifts can come right to the door,” says Duncan Savage with a wide smile showing me around his urban cellar in Salt River. He’s as excited by this as if he’s just told me he’s off on a surf trip to Bali for the next six months. It’s understandable. Trusting your entire winemaking operation to a building in the middle of the city is not without its anxieties. This is no farm cellar looking out onto the vineyards, where your grapes can come in early and easily. No, urban winemaking takes some serious hustling.

“We needed a home for the brand,” say Duncan simply, steering me back into the barrel-cum-tasting room. After been having made for a number of years at Cape Point Vineyards (where he was the winemaker) Savage Wines now has a place to call its own. 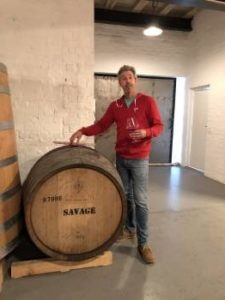 I’ve gatecrashed another tasting. I join visiting wine buyers from the States, who are sprawled along a wooden table, which is littered with Zalto glasses, while Duncan moves with a wine thief from barrel to barrel talking a mile a minute as he goes. “I’ve got something new for you to try,” he says holding the thief over my glass. Fittingly, the wine is called Thief In The Night 2017, a blend of syrah and grenache. “There’s a generosity to the wine. Can you taste the passion fruit? Grenache when picked early often gives that flavour. It’s not going to be everyone’s cup of tea.”

While he says that financially a farm was out of their reach, even if they had bought one he would continue to buy in grapes from the 17 vineyards he works with. “We have a style and vision that we don’t want to mess with. My most important relationships are with the growers. I invest in their blocks. To keep this industry sustainable you have to pay premium for grapes—farming is tough and growers need to be able to sustain these old parcels that crop almost nothing.”

Duncan has an intimate knowledge of the sites. “I drive a lot, over 70 000km a year—my new bakkie is no longer so new.” In his typical ‘look on the bright side’ way he has about him, he flips the statement and says, “but that’s what so great about South Africa, you don’t have to drive the same way to a vineyard twice, there’s always a new dirt road to explore, or a new farm to pop in to.”

This habit of seeing the silver lining has served him well. In his younger days his family moved around quite a bit, and after school he moved down to Cape Town to get in as much surf time as possible while studying a BCom. Somewhere along the line he developed a love for a wine—thanks in part to drinking some good wines with his mom, which led him to do a few courses at the Cape Wine Academy. When not surfing, he found himself driving to wine estates on the weekend, and by age 21 he had his own wine collection going. In between all this wine and water, the BCom got neglected. The answer of course was right in front of him: he enrolled in Elsenburg, which was to lead to some of the best times of his life.

Normally final year students go on an educational trip abroad and to do this they need to raise funds via an auction.

“Our auction crashed and burned,” says Duncan with a shrug, “so we decided we were going to be creative and live in a wine tank at this festival at the V&A Waterfront.” For five days, Duncan and two others lived in a wine tank, parked by Vaughan Johnson’s wine shop in a bid to raise some cash.

“We made no sales, but we made up for it with connections. This industry is all about relationships—if you’re not prepared to put in the time, you’re dead in the water.”

Case in point, when he finally got out of the tank and applied for the job as winemaker at Cape Point Vineyards, well, they said no. Luckily, Duncan had made a friend in Hermann Kirschbaum (cellar master of Buitenverwachting) while in the tank, who suggested CPV reconsider.

“He put his chop on the block for me as they say,” admits Duncan. “I owe a lot to him, he got me going.

“The gods were smiling—my biggest fear as a surfer was to end up somewhere like Tulbagh.” Fast-forward a successful 14 years at CPV and it was time to put all his focus into pursuing his own brand.

It was always my plan to go on my own. I had wanted to do it by 35, and I finally took the plunge last year at the age of 38.

“We have no investors involved, which I’m really happy with as it’s our family name and it’s really important to us.” (Duncan has been married to Zani—who he met at a wine-tasting—for over a decade and they have two daughters).

“Here try this,” he says pouring the Girl Next Door 2017 syrah. “It’s made from a vineyard near the ocean that gets klapped by the wind. It must taste like the site.”

This underscores his winemaking style pretty neatly. “At the start of every harvest, I want the wines to be a certain way in my head, but it never works out that way. It makes it interesting to be totally at the mercy of the environment.”

“What you see is what you get. If you do things simply, and lay yourself bare, the purity you achieve is worth the chance.”

This speaks to the ethos of the new-wave movement Duncan and his cohorts are currently spearheading. “Look it can’t be ‘new wave’ for the next 20 years. It’s not sustainable in the long term, but for now it’s relevant. South Africa has lifted its game. It’s a way of saying here we are—we’re a major player.”