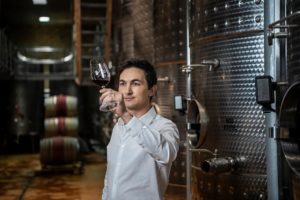 “You’ve got to cultivate your garden,” says winemaker of Babylonstoren, Klaas Stoffberg. The line comes from Voltaire’s novella Candide, and it inspired the name of the white blend Klaas is pouring us: Candide 2018 (Chenin Blanc, Viognier, Chardonnay, Sémillon), a nod no doubt to the farm’s world-renowned gardens. Klaas also sees it another way.

“Everybody is always in a hurry. It’s so important to take a breath,” he says. “I try and drink at least two glasses of wine a day.” I’m helping him with that task in the estate’s tasting room. Not to speak in clichés, but if ever a wine farm was a feast for the senses, Babylonstoren is it. Your eyes open a little wider here trying to take in all the detail.

At the entrance to the wine cellar and tasting room area, a diorama of cut out paper people and agricultural motifs, lit from behind, illustrate the farm’s history. Salvaged tools hang from the ceiling above a tribute inscribed with the names of all the farm workers from time immemorial. From there a set of stairs sweeps you up into the steel and glass tasting room, designed to make you feel as if you’re floating above the surrounding vineyards.

Importantly, from here you can see the conical Babylonstoren hill, from where the farm got its name. This koppie is said to have made the first owners of the farm think of the Tower of Babel and so named it ‘Babylon’s Toren’.

This kind of attention to detail suits Klaas. It’s how he approaches his winemaking, and well everything in his life. Snack platters have arrived, heaped with produce from the garden, and Klaas has systematically and very neatly organised the food on his plate before he begins to eat it. He laughs when I point it out, and agrees that it’s telling of his perfectionist nature.

Klaas is no stranger to farm life. He grew up as one of three brothers on a farm in the Swartland (grapes, sheep, cattle), and this is, of course, where his love for wine was born. The official story of why he became a winemaker, he says, is that he always wanted a job where he could blend nature and science, and that winemaking was the perfect combination of this. The unofficial story took place on the back of his dad’s bakkie. His dad would need to transport canisters of wine, and the three boys would hop on the back to help steady them. The containers had little air holes that the wine would slop out of and Klaas aged six, would sample some. “I told myself, one day I’ll make better wine than this!”

And so he has. He got his degree in Oenology and Viticulture at Stellenbosch University, where he met his now wife Ansoné, also a qualified winemaker—who works in exports and logistics for Neil Ellis Wines. (The pair has two children, a son and a daughter.)

Then, he went to go see the world. First was Napa, California.

“In America I learnt how to work with people, but it was in France that I truly fell in love with wine.” He says referring to his time in St Emillion. He also learnt in France how to slow down and appreciate life. “No matter how busy you were with harvest, we always had a two-hour lunch.”

In between his travels he was being schooled by some of South Africa’s best red winemakers. From interning at Rust en Vrede to an assistant winemaking position at Ernie Els, working under Louis Strydom. “It was great working for Louis, he always allowed me to experiment with my own ideas, while also learning from him.”

It was during this time that cellarmaster of Babylonstoren, Charl Coetzee reached out to him. Klaas jumped at the chance to become winemaker—but not before he made a deal as part of his contract. “I stipulated I wanted to keep travelling, working vintages around the world.”

As another mentor of his, Beyers Truter once said to him: “How can you make the best wine, if you don’t taste the best?”

With formative years like this, it’s no wonder the Babylonstoren Babel 2017 scored 93-points on the 100-point quality scale in the Signature Red Blend Report 2018.

“There are about 35 different components in the wine. I have quite a technical approach. From each block I do six different pickings. And I do this to learn from the block as well as to build complexity.

“I try different yeasts on the separate components; I ferment them at different temperatures. Then from the allocation tasting, the best of these will be blended.

“For sure it’s probably easier to pick whole bunch and just ferment it in one tank. But by doing it this way I never stop experimenting, and so I never stop learning. It’s about attention to detail—and trying to get to that perfect wine.

“What do they say? Shoot for the moon and even if you miss, you get the stars? That’s what I’m trying to do.”

Though committed to his craft, Klaas never forgets to cultivate his own garden. “It’s not only about making wine, but also about enjoying it.”

This is one winemaker who knows a thing or two about keeping it Klaasy.