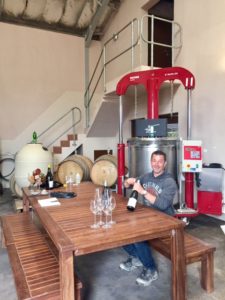 Koen Roose is sitting inside his Elgin cellar at a wooden bench, stirring a bentonite mixture with an oversize whisk. I ask him what wine the fining agent is for. Cracking a big smile, he says “The Riesling 2017, can you believe it!”

“Come, come,” he says in Flemish-accented English, hauling himself up and me out the door, a trio of dogs at our heels. I soon learn that this is how he is; a bundle of tightly wound energy, never sitting still for long. Not that he could. Koen says that there are only five people working on Spioenkop Estate, and all viticulture and winemaking is done by hand.

“I bought this farm with nothing on it. Having virgin soil was very important – the last a thing a grape wants is food.” We trudge over a path strewn with bokkeveld shale and ferricreet cobblestones, to reach the farm’s hilltop. It’s a weather machine up here. Grey-white clouds boil over the valley below and raindrops whip through the air at an angle, brought in from the nearby Atlantic. Koen explains how the valley is like a crater, and that the whole area was once actually a swamp – as evidenced by fossils of lake mussels (and sunken ox wagons at nearby Oak Valley). He shows me the borders of his farm, drawing his finger through the air in a not-so-neat triangle. The different vineyards are clearly defined in divergent gradients of soil – in over a decade these vines have had no water. “If you need to irrigate your vines, you should plant something else.”

Back in the cellar Koen tells me his story. At university, in country-of-birth Belgium, he was on track to become an engineer. He even won a position in school office as ombudsman – by walking an elephant down a street. It was the director of the varsity who said to him at some point – “What are you doing?” (About the engineering, not the elephant, everyone loved the elephant). “Engineering is not for you.” He took the advice to heart and poured himself into the world of wine.

He went on to become a sommelier of note, while at the same time establishing an export company to Belgium focusing on South African wines. That’s how he met is “teacher”, François Naudé then of L’Avenir. “He saw something in me, and he offered me the chance to come and work with him. François taught me everything I know about Pinotage.” He spent a number of years there, working in the vineyards, before promoting himself in the cellar: “Because I’m Belgian, I take positions without asking.”

From L’Avenir it was to Tokara to learn some more. During this time he spent five harvests in Burgundy working the vines. “In Burgundy I had no interest in the cellar, it was all about the vine. It was magic. You start talking to your vineyards – and when you do, you start finding solutions, and every vine becomes a work of art.”

While juggling new world and old world harvests, he nurtured another dream – a farm in Elgin, which he bought in the early 2000s. While he waited to officially begin farming, he would come to the farm and walk it, picking up rocks, and forming his plan in his mind – true to Spioenkop’s mantra of “a great wine begins in your head”. “Before I had my first harvest, I knew exactly where I wanted to go.” The first vintage was in 2011.

Spioenkop is making a name for itself as a leader in what’s being called “New-Wave Pinotage”. They’ve just released two Pinotages for 2016.

“If you look at the DNA profile of Pinotage it’s 65% Pinot Noir – why do we make such blockbusters out of it? I make Pinotage like my brain wants to make Pinotage.” It starts in the vineyard of course, with small bunches and small berries that have “beautiful phenolics”.

He says he has the utmost respect for the old-school Pinotage producers – but he says that this is simply a different style, a cooler climate version. The 1900 Pinotage 2016 he bills as a tribute to his “teacher” and is a blend of Stellenbosch and Elgin and focuses on the fruit character of Pinotage. While the Spioenkop Pinotage is 100% from the Elgin farm, and offers intensity, purity of fruit and elegance.

Koen eases a cork out of a bottle of the Riesling 2016. “I never thought this wine would be so successful,” he says smiling. “Historically in this country Riesling has been used as a bulk component and has been made to taste cheap, sweet and tropical. Riesling must shine like a diamond! It must have minerality, purity. How do I do it? I don’t know, this wine makes itself.”

We move onto the Sarah Raal Chenin Blanc 2016. One of his biggest challenges. “You don’t see Chenin in Elgin, why? Because of rot. So you need to spray, but I don’t use any systemic chemicals on the farm.” He sprays the Chenin, which has been planted on poor, rocky soils, with small amounts of sulphur, and he keeps the canopies as low to the ground as possible.

Before I go I ask him about all the references to the Anglo-Boer War (the name Spioenkop comes from that the Battle of Spioenkop in 1900, the vineyards have names relating to colonial South African military history as do some of the wines). “I love history,” enthuses. “It’s a big passion of mine!”

It’s fitting then that Spioenkop, with its New-Wave Pinotage, is already making its own history in the Cape Winelands.