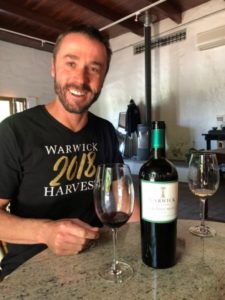 Nic van Aarde is wearing a black t-shirt emblazoned in gold with the words “Warwick Harvest 2018”. Noticing my look, he says with a smile, “We had a little extra budget this year.” We’re inside the Stellenbosch property’s tasting room and the day has just started to hum alive around us.

Though for Nic, the day began way earlier—both in the cellar as well as at home as a father to two young daughters. Early wake-ups are no big deal for this dynamic winemaker, and on getting to know him, Thoreau’s quote comes to me: “I wanted to live deep and suck out all the marrow of life.” And that’s just how Nic is: from travelling to the ends of the earth to discover the secrets of sauvignon (well, to New Zealand) and to making wine amid the chaos of India. He’s a winemaker who isn’t afraid to push boundaries, whether geographically or in his winemaking.

Though he was born and raised just a stone’s throw away from Warwick, in neighbouring Paarl. In a sense, he was brought up on Bordeaux varietals; his mom worked for Nederburg for 30 years and the Van Aarde household was never short of their wines, in particular the classic cab-merlot blend, the Edelrood. The pull of wine was ever-present, but it was in his vetenarian dad’s footsteps he followed first.

“It was my dream to study medicine and when I didn’t get into the programme of my choice, I was devastated,” he says.

He was now halfway through his B.Sc and admits he didn’t know what to do. “I didn’t see myself in a lab,” he says. So it was back to the Universtity of Stellenbosch where he decided to pursue a B.Comm in Marketing, also joining the Wine Culture Society as a pastime. “Then the wine bug really bit.” Wanting to change tack again and study Viticulture and Oenology, he first completed his B.Comm, before finishing his B.Sc degree in Viticulture and Oenology. Having these two degrees has given him an edge: “The B.Comm helps me to make strategic business decisions. It is easy to make wine but it can sometimes be a challenge to sell it.”

Freed from the ropes of academia, there was then no stopping Nic. From there he worked harvests in Australia, New Zealand, California and France.

“I’ve always been passionate about sauvignon blanc, so I wanted to find out what it was about New Zealand that makes their wine so good. The climate is just so radical, I remember standing on a roof at 4am one morning just watching helicopters hovering over the vineyards to help dissipate the frost. I learnt a lot about reductive winemaking there.”

From the new world to the old. It was then it was cabernet franc’s turn to be discovered in 2004. “My love for cabernet franc started at Chateau Angelus in St Emillion.”

“Cabernet franc needs a special touch.” He should know, the Warwick Cabernet Franc 2015 has just scored the top marks (93 on the 100-point quality scale) while the 2014 was rated 90 in the recent Alternative Varieties Report 2018.

“It’s not like the Rhône varietals, which you can just chuck in a tank, stems and all,” he continues. “Have you ever chewed on a cab franc stem? It’s very bitter, versus a shiraz stem which is actually quite pleasant.”

Luckily he doesn’t offer me some stems to chew on, but rather a glass of the Cabernet Franc 2014. While we taste he tells me that Warwick was the first farm in South Africa to produce a single vineyard Cabernet Franc in 1988. A notoriously tricky grape, he says “We’re lucky our farm manages to ripen cab franc and we get that beautiful spice spectrum that can make the varietal so appealing.”

But just how did he get to Warwick? After his harvests abroad, he came home and clinched a job at Mulderbosch working under Mike Dobrovic. “He’s one of the smartest winemakers I know. He instilled in me absolute attention to detail.”

After four years at Mulderbosch, wanderlust came knocking again, and he got the unusual opportunity to go work at a winery in India. He leapt at it, prompted in part by his love of cooking curries.

Reflecting on his time there he says: “Everything that could go wrong, did. It was a massive learning curve. After his trial by fire and spice he was ready to settle down again. Warwick, begun by Norma and the late Stan Ratcliffe and currently run by Norma’s son, Mike is one of the country’s most highly regarded properties and Nic became winemaker here in 2010. “It was the longest job application process I ever went through,” he says with a smile. “I spent a whole afternoon with Norma opening old vintages and chatting, and I had a few different interviews with Mike”.

Another highlight in his career here so far has been when the Warwick White Lady 2014 won the 2016 Platters White Wine of the Year.

He puts a lot of energy into the chardonnay. “It ferments for 6 months, we roll barrels out in the sun. But it pays off. Chardonnay needs to go through that bit of struggle to reach its full potential.”

When it comes to winemaking in general he says: “A lot of wineries say it’s all about the fruit, and yes, fruit is important, but you also need skilled winemaking to showcase that fruit to the best of its potential.”

Does he put this much focus into the rest of his life as he does his winemaking? “Being a dad has given me new perspective. I used to burn myself out. Live life too much. My daughters have brought me back to earth.”

That’s exactly where they’re going to need him. Warwick is currently in a phase of transition: Along with building a new cellar they’re now also shifting their focus and tailoring their range to be one of South Africa’s top Bordeaux-style producers. In particular, look out for the new Sauv-Sem blend Professor Black 2017 being released later this year.

Finance minister (at least for now) Tito Mboweni is becoming a personality you have to follow on Twitter, outspoken on matters of politics and current affairs but equally quite candid...