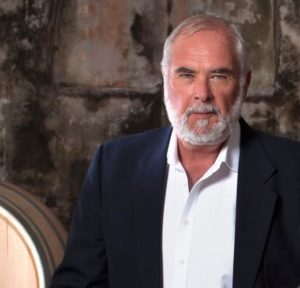 Peter Finlayson is carrying a basket of wine as he enters Bistrot Bizerca in Cape Town. He’s exactly my kind of lunch companion—well stocked. Finlayson eases his large frame into a café chair. Our table is under the dappled light of the Cape’s oldest fruit-bearing vine (250 years and counting) in Heritage Square’s courtyard.

An iconic vine for an iconic winemaker. Finlayson not only claims the title of being the first winemaker in the Hemel-en-Aarde Valley — a region celebrated for its top-tier wines — but also as the ‘Pinot Pioneer’ after having made the first in 1981.

“A unique aspect of the Hemel-en-Aarde is that it’s been planted with the very purpose of producing fine wines,” says Finlayson.

“People thought I was a lunatic [referring to the inception of the route]. “They said if Hermanus could have been planted with vineyards successfully that it would have been done years ago.”

Up to this point we’ve been sipping on Bouchard Finlayson’s Blanc de Mer 2014 — a name that translates to ‘white of the sea’ — a Riesling-led white blend. A platter of oysters has arrived at the table, and to complement it, Finlayson uncorks Blanc de Mer 2003; rich and honeyed with lime and peach flavours

An oyster lover, he tells me he how he used to dive for them at Keurboomstrand, and then eat his catch on the rocks washed down with Blanc de Mer.

Finlayson grew up in rural Constantia. There weren’t many fences in those days, and no one locked their doors. His family had a table grape farm, and he remembers loading up a lorry with the produce to take to the market in Plumstead.

A Rondebosch High old boy he says he has always loved animals, and wanted to be a vet. “I didn’t have the grades though, so for a while I was a bit lost.”

Instead, he put his head down and played rugby. A lock for Natal University at one time, he recalls match against UCT.  “They had planned to give me an uppercut during the match, but fortunately they missed.”

His background in farming soon led him to study oenology at Stellenbosch University.

“My lunch foster mother was Frense Flockermann. She lived on a smallholding outside Stellenbosch, where she produced plums.”

These lunches were seasoned with much wine — he would go back to his lectures quite happy.

His university days also introduced him to his wife. “I noticed her for over a year. One day I got up the courage and asked one of her friends who she was. The friend replied that she just asked who I was!” The pair went on to have two sons, and now two grandchildren, too.

While his one son Andrew is an architect, the other has also made a name for himself in the wine business. Peter-Allan Finlayson who has recently become the winemaker at Gabriëlskloof, and is also winemaker of the much acclaimed, privately owned Crystallum Wines.

Going back to senior Finlayson, after Stellenbosch University he furthered his studies at Geisenheim in the Rheingau, which lit a spark for the Hermanus region: “If you can grow grapes in Germany, you can in Hermanus.”

Though it was the Boland who claimed him first with three years at Boschendal, including some time at Hartenberg as well as at Bosman, where he had “a wonderful education in the viticulture nursery”.

A decade and some highly rated wines later, things changed again with an award acting as a catalyst.  Taking home the 1989 Diner’s Club Award for Pinot Noir, he befriended one of the judges, négociant Paul Bouchard.

After visiting Bouchard at his home in Beaune (days spent drinking wine and walking vineyards), it was soon time for another first. They decided to become partners in a new Hemel-en-Aarde winery, said to be the first investment by a French wine family in the Cape).

And yet another first was the decision to plant high-density vineyards (9000 vines per hectare), something Finlayson was inspired by in California.

“This kind of planting not only maximises the use of the land, but the smaller, more manageable and efficient canopies also creates competition between the vines.”

All this talk of Pinot has Finlayson reaching into his basket for both the 2013 and 2007 vintages of his own Galpin Peak. It’s said that Pinot Noir is the most terroir-driven grape in the sense that its environment imprints on the wine like no other. If this is true, the proof is in these Pinots with their rich yet elegant flavour profiles.

After 37 years  in the Hemel-en-Aarde, it’s not surprising that Finlayson knows what he’s doing when it comes to wine and he’s got the accolades to prove it. What is surprising, though, is that he’s been a yoga enthusiast for a number of years. He’s also channelled his love for animals into photography and has even mastered the art of developing black and white prints.

“I like living science,” he says with a smile, “from elephants to micro frogs.”

That explains a lot — these wines we’re drinking right now are the study of living science itself.