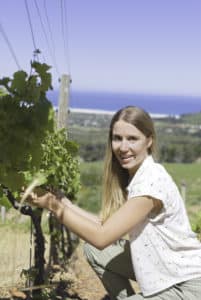 “This morning the cellar smelled like mussels and I could hear the ocean in the background,” says winemaker of Cape Point Vineyards, Riandri Visser. “Just being here makes you feel instantly refreshed.

“The vineyards must also feel that energy; and that intensity hopefully carries over into the wines,” she says.

Riandri knows a thing or two about the revitalising effects of the ocean; her green eyes still carry a sting of salt from a weekend spent surfing in Muizenberg. She lives locally in Noordhoek with her boyfriend, Drew Harty—who is a winemaker at Quoin Rock Wines.

We walk over the terrace to some couches, drinking in the view as we go. Rows of summer-green vineyards descend into the wide sandy expanse of Long Beach and to the glittering Atlantic beyond.

Set against a rocky mountain outcrop on the Cape Peninsula, Cape Point Vineyards deals in Sauvignon Blanc and Semillon, grown on granitic, ocean-infused soils. The most famous of their wines is the blend known as Isliedh, the 2017 vintage the top scoring wine in the Aerobotics Sauv-Sem Blend & Wooded Sauvignon Blanc Report 2018.

“With the 2017 we changed the percentage of Semillon: it went up to 24 per cent whereas it used to be at 17 per cent,” explains Riandri. “Being my first solo vintage, I wanted to respect the wine but at the same time to also make my own mark. So we went to the library and tasted through the earlier vintages, which had higher percentages of Semillon. The length and purity of these wines amazed me; and I loved how they had aged.

“After the tasting we decided to up the Semillon in Isliedh and therefore to bring down the percentage in the Reserve. I wanted to go back to that classic Cape Point style, and to steer the wine more into the direction of being known as a blend.”

That’s not all she did differently this vintage. “While the wine usually spends 10 months in barrel before bottling, this vintage, instead of bottling it straight after barrelling, we left it in steel tanks for a further five months. The wine was quite angular and I wanted to give the two cultivars a chance to merge.”

At just 28-years-old, it was a bold move for this young winemaker to make these changes – she could have easily coasted along at this maritime estate.

Though she’s not one to play it safe. Born and bred in Cape Town, after school Riandri headed to Stellenbosch University to study graphic design. “My whole life I’ve been good at art, but when I got there I felt under pressure, and my creativity felt blocked. I needed a different dimension in my life. I had a very difficult conversation with my mom and took a gap year, during which I worked as a waitress and I started to get exposed to wines…” Within the year she had signed up at Elsenberg. Wine went from a marginal interest to a full-blown obsession.

She graduated with a degree in B.Agric (Cellar Technology), Viticulture and Enology, and went to the Piekernierskloof. “Tierkhoek was the perfect place to begin my career – at this small farm in the middle of nowhere. It was a wholesome experience; I didn’t have all the latest gadgets.”

Next up was Tokara, where she worked under the tutelage of respected winemaker Miles Mossop (and got to use plenty of gadgets). It was in 2014 that she joined Cape Point Vineyards as the assistant winemaker for another celebrated winemaker, Duncan Savage.

She took over as head winemaker in 2016. “It was a wonderful and scary moment.
I wanted it so badly. And now I sit here,” she says gazing off into the blue, a glass of the award-winning Isliedh at her lips.

It’s no happy accident. Riandri is a Sauvignon devotee, so much so that her dog is called Sauvignon, while her two cats are named Sancerre and Loire. If Bartho Eksteen is known as the Sage of Sauvignon, then Riandri Visser – with her view of the Atlantic – is the Siren.

“Cape Point Vineyards is about this,” she says gesturing at the vision before us. “I can almost imagine the wind blowing through my hair, and that salty feeling on my skin.

“I’m going to use that word, ‘minerality’—to me it means ‘refreshing’, like the surf washing over pebbles on the beach.”

So what’s next for the Siren of Sauvignon? “We’re currently planting another cultivar on the farm, I can’t tell you what it is yet, but what I can say is that we’ll be the first in South Africa to do so.” Postscript: She did tell me; and it’s a game-changer.