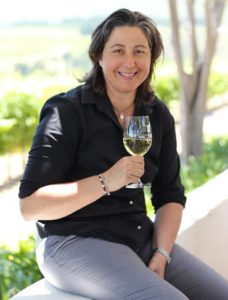 Rianie Strydom has this way of focusing her attention on you that makes you feel that what you’re saying is important. A conversation with her is empowering. I imagine this is one of the qualities that’s made her so popular in the wine industry, if not for her excellent winemaking.

Rianie is the general manager and winemaker at Haskell Vineyards. She also has her own boutique label, Strydom Family Wines. Haskell is located up a winding road, which gets narrower and steeper the closer you get to the winery, passing celebrated estates such as Rust en Vrede and Annandale Wines. It’s an enclave of quality clustered on the slopes of the Helderberg.

Against the backdrop of a roaring fire in the tasting room we swap stories about sleepless nights. Mine, newborn baby related, hers, business. I comment that she looks far too cool and collected to be having sleepless nights. “You know it’s like a swan, all grace on top, but underneath the water the feet are going a mile a minute.”

“These days making wine is not the biggest part of my job,” she continues. “It’s the business and wine selling side too. During harvest I sleep like a baby; winemaking is the best part!”

She says she recently gave a talk for aspiring winemakers at a careers’ evening, and in it she told them to put the romantic notions of winemaking aside. “If you truly want to succeed in this industry you need to have a head for business.”

Though to be fair, romance and business are intertwined concepts in her life. She’s married to Louis Strydom who is himself a renowned winemaker (as well as managing director of Ernie Els Wines). He’s also the silent partner in Strydom. Is there some healthy competition between them in winemaking? “Not at all,” she says smiling. “We have two very different styles.”

Back in the ‘90s before they’d got together they were in a wine tasting club; and she called him out on his scoring. “He kept scoring his wines in the middle, I told him to stop being a fence sitter.” The next week he asked her out.

They got married in 1997 and went on to have three children: two sons and the youngest, a daughter. “I would have loved to have even more!”

Before all that though, she was farm girl, having grown up on the Joostenbergvlakte, where her parents farmed some vegetables and fruit. It was among these prosaic crops that the winemaking seed was planted. Decisive then as she is now, she knew by age 14 what she wanted to do with her life. Though it wasn’t just wine that intrigued her, but everything that came with it too.

“I love being outdoors and I liked how in winemaking you get to combine science and nature.” So off she went to study at the University of Stellenbosch, completing a Bsc. in Viticulture and Oenology.

During her student years she worked part-time at Morgenhof as a ‘cellar rat’. Her dedication paid off and as soon as she finished her studies she was offered the position as assistant winemaker. Another five years later she was appointed as head winemaker. After a full decade at the Simonsberg-situated winery she handed in her resignation, wanting more flexibility in her life, she felt it was time to start her own business.

So, they bought a Stellenbosch farm and called it Strydom Family Wines. As content as she was to sink her teeth into that alone—she couldn’t ignore the next opportunity that soon came knocking.

American businessman Preston Haskell bought Dombeya in 2002, and he needed someone to dream it into something. Rianie was just that dreamer. “I loved the idea of building this brand up from nothing. I started as a freelance winemaker and I never left.”

From nothing to a multi-award winning something: the wines from both the Dombeya and Haskell brands have raked home the bling. Notably, the Haskell Pillars Syrah 2007 won three trophies (Best Shiraz, Best Red Wine and Best Wine of Show) at the 2009 Tri Nations Challenge against Australia and New Zealand. This was the first time since the inception of this competition that a South African red wine had garnered these accolades.

And the awards keep tumbling in. Most recently the Strydom Rex 2015 scored 93 on the 100-point quality scale on Winemag’s Prescient Cabernet Sauvignon Report 2018.

Speaking of, all of the Strydom wines she makes in limited volumes. Only 2300 bottles of the Rex 2015 were produced.

In terms of winemaking she says: “I want to respect where it comes from and what the site gives me. I’m after complete balance and structure. I need the fruit tannins to make strong enough bonds with the wood tannins; which results in finesse and length in the finished product. It’s all about how you work your grapes.”

When I make a wine I always picture how I want it to be like in ten years. What’s important to me then is structure, good colour, and a thoughtful wood regime. You want to cellar the style of wine I make for Strydom.”

Her fine winemaking skills are clearly not contested. This is a winemaker whose default setting is excellence. But what she’s currently struggling with is to make a more accessible market-friendly wine. “I don’t know how they get that fruit-forwardness,” she says exasperated.

Luckily, she’s not afraid of trying new things. Her ability to step outside of herself and innovate saw her becoming a member of the Cape Winemakers Guild (currently one of two of the female members).

“I was on that waiting list for many years,” she laughs. People often ask me what they have to do to get invited to join. You have to build a reputation. You have to do stuff where people take notice. It’s not about ego; it’s about getting your message across in the most effective way.”

Apart from her hands in grape skins and sleepless nights over spreadsheets, another important part of the business is getting out there and selling the product. At a recent wine event, she was behind the stand to pour her wines to the invited media. She surprises me by saying: “You stand there behind the table and you get nervous.”

Nervous? A multi-award-winning winemaker, a CWG member, an innovative, courageous businessperson, a beloved figure of the industry… and she’s not immune to a case of the nerves.

I guess we can add modesty to that growing list of qualities that make Riane Strydom just so damn likable.