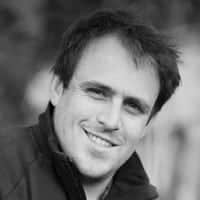 “We’re making wines to age,” says Warren Ellis. Warren, the eldest son of Neil Ellis, teamed up with his dad several years ago to make the eponymous wines—and under his stewardship the legacy of quality winemaking continues unabated.

The Ellis genes are unmistakable. The enquiring tilt of the head, the same broad-shouldered, tall build. This is Neil Ellis’s son alright. Does the resemblance go beyond the physicality? Has a talent for winemaking been hardcoded into his DNA too? The short answer is an emphatic yes.

We’ve met today at Neil Ellis Wines, located just on the first incline of the Helshoogte Pass. Looking out over the vineyards from the tasting room, Warren unspools the tale of the Ellis clan—a modern winemaking family. “Our wines are Old World in style with a contemporary winemaking approach.”

It’s a solid vision, born out of Neil Ellis’s four decades in the wine industry. Ellis senior began his career at KWV, followed by winemaker posts at both Groot Constantia and Zevenwacht.

Warren has hazy, vineyard-green tinged, memories leftover from exploring these estates as a kid. But his father’s dream was to make his wines under his own name, and he made this a reality in the ‘90s. In fact, he was a front-runner of what’s now quite common – making site-specific wines from vineyards tended by different growers.

Something Neil Ellis Wines continues to do today—even though they now have their own tract of vineyards under the sun. Warren, in an echo of his father, simply says: “It’s impossible to do the best of everything on a single estate.”

Warren isn’t the only Ellis involved in the family business. His younger brother Charl heads the finance department, and his sister Margot is the winery’s brand manager.

How come Warren got the gig of winemaker and not the others? “My mother says I was the only one of my friends who did not want to be a fireman, policeman or doctor,” laughs Warren. “I always wanted to be in the vineyard or cellar like my dad.”

“We strive for elegance, and yes, we’re making wines to age,” he says repeating an earlier statement. The popular opinion is that the South African market just wants to drink new releases. But Warren disagrees. “There is a market for older wines, especially in restaurants. Plus wines with some age are just so much better to drink, and the general consumer is realising this.”

Warren is now a father himself. His children, Alec (5) and Leah (3), he says, have changed the way he approaches life. “They’ve given it so much more meaning.”

It’ll be interesting to see who next takes up the winemaking baton. Long may the Ellis dynasty continue.