Stories are good. And even better with wine.

It may have become a cliché in contemporary PR talk (often because it’s a flimsy marketing effort), but there is no doubt that back-stories to the things we yearn for, make those things even more desirable.

If you’ve produced a bottle of wine that has an interesting history, you should flaunt it. It can be so much more than added value, customer-wise. Who doesn’t like a good story?

The importance of the narrative aspect of desire struck me while paging through a recent expensive, glossy catalogue for a high-brow art auction. (Listings of the two recent local wine auctions made valiant attempts.)

Auctions are by nature the basic form of the capitalist construct “free-market” trading: you pay because you want what is offered. You want it because somehow the message got across that it fits your desire: clever marketing, whether in words or image or both. And this is where in the fancy world of auctions the glorious pompous word “provenance” fits in. (Imported from the French because “origin” or “source” sounds, well, so ordinary, it is one of the numerous buzz words that hype up the cultural theatre of art and wine. And dare I mention the chestnut “curate”? Even the mentioned recent wine auctions flaunted this silliness.)

The smart art auction catalogue spells out first, precisely and clearly, what is for sale (title, measurements, date, medium, etc.).

Then comes provenance (where it was made, who bought it originally, where was exhibited, previously sold, in whose collection housed, etc.). This is the history, the back-story, the tale to tickle. (The “secondary market”, the haunts of the newly-invented local wine auctions, has some way to go on this.)

But, talking history – or simply story – in the South African world of wine, where there are many veins to mine after 300 years plus history, is often an opportunity missed or ignored. Hence it often doesn’t come into play when a pleasant glass is poured and prompts the inquisitive mind. (The Old Vine Project can act as a fine meme to trigger this.)

The millennials, they say, are not interested in the same things as their parents, but it feels sad to keep them in the dark about the many colourful characters that inhabited the local wine country and who created what we can loosely call South African wine culture. Many spirited adventurers walked the vineyards and through dusty cellars of the past. (Joanne Gibson, after detailed research, has told great tales on these pages.) 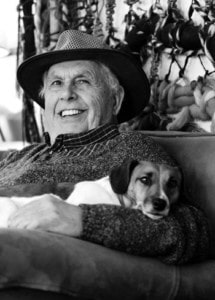 At a celebration a while ago to toast the well-known winery of Delheim, which was acquired 80 years ago by the Sperlings and their relations, the late Michael ‘Spatz’ Sperling, perhaps the ultimate character to tread the Stellenbosch Winelands, was the absent guest at a nostalgic lunch.

Not only a man to tell stories, but to have lived them. And there are numerous in the Delheim history, many which define the uniquely wayward, even eccentric image of this well-known winery. In fact, together with neighbouring picturesque Muratie, which, over the decades, had to put up with visitors driving through to properties beyond, this nook is a tapestry of old Cape wine history.

The homely celebration sit-down was in the old cellar (built by prisoners of war), there was ancient sweet wine (originally bottled in beer bottles) and established wine maker Kevin Arnold (who started out here) to represent the generational industry impact of Delheim.

Then there was the matriarch, Vera Sperling, charming as ever, also 80. (Her father started the famous first exclusive “interior shop” Binnehuis.) In her own quiet way no slouch in story-telling, she stole the show relating how, in their courting days, she danced nude under a net after Spatz hid her clothes during a skinny-dip.

How, I ask myself, can I take this image from my mind sipping a glass of Delheim’s Vera Cruz Shiraz? Yeah, stories matter.