Melvyn Minnaar: The role of wine in rituals and remembrance

It shouldn’t be a surprise that my first taste was of wine that belonged to the church – nagmaalwyn – communion wine.

About age twelfth, I was intrigued by the significance the officials of the church subscribed to a dark liquid they poured into tiny glasses, and the very formal quarterly service accompanying it in the NG Kerk. (Nagmaal had particular status in the classic Afrikaner culture, going back deep into history and the platteland.)

Although, as Sunday school kids we had to sit through the sombre ritual, we didn’t get to participate nor taste. At home, my father was, for his own reasons, let us say, not keen on alcohol. (Mother sipped a G&T or Ginger Square on occasion.) So wine was foreign – and thus a teenage fascination.

Tasting the forbidden arose when we youngsters discovered where the deacons stored the juice. The church hall where we practised our school concerts had easily opening cupboards. (This bit of white naughtiness was facilitated by the twist-off cork on the muscadel which made the sweet-sweet experience so easy.)

Can one ever forget that first sip? That spark of wine’s existential truth?

Social constructs around wine are what delineates it as more than just beverage on the grocery list. Wine plays momentous roles in the rituals that take humans from birth to death. Or elsewhere.

The function of wine in Christian religions is a whole subcategory of theology. (As much as others had formulated ethical objections to use of alcohol.) But one note that comes through in biblical tellings is that of sharing – “communion”. Of drinking wine together. So I’m punting the humanist imperative to open the treasured bottle in good company.

In one tradition, a special, treasured bottle would be port. Acquired at birth, carefully cellared, and opened when the classic key to coming-of-age (such as it was) was handed over at 21. Great fortified, sweet wines made to age gracefully and shine after two decades and more in the bottle.

We have such stuff. Check out Calitzdorp.

Sparkling wine, of course, are for those other happy human times. (And, as far as I’m concerned, the longer on the lees in a bubbly master’s cellar, the better the sparkle genie released in celebration of life.)

Such moments, when glasses are raised, they call a toast, a tribute. The Afrikaans “heildronk” has a fine, poetic medieval ring to that individual expression.

But back to church and communion wine.

Today the wine poured on church high days is still sweet, aromatic and heart-warming. One can understand the reason. And not only that fortified wine doesn’t go sour in the bottle once opened. (A small thesis could be written about the Afrikaans churches and their relationship with hanepoot.) 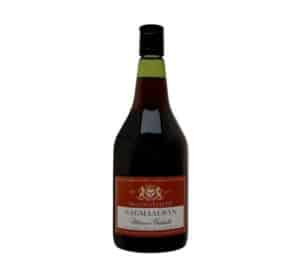 Top providers of today’s nagmaalwyn include Mooiuitsig and Jonkheer in Bonnievale, Namaqua in Vredendal. These are places where grapes bathe in heavenly sunshine.

Perhaps the most romantic communion wine story is the one of the famous Strooidakkerk in Paarl – one of the most beautiful churches in the country with its gentle thatched roof and clock tower, a stately building worthy of a special libation for its rituals.

Wine for its communion services is tapped from a small vat, regularly topped-up solera style and housed at the KWV cellars nearby.

The little barrel and its tradition date from the early 18th century, when one Herman Lambertus Bosman from the Drakenstein farm De Nieuwe Plantatie, the leading church elder and medical handyman, acquired two vats from the Dutch ship Overrys to fill with wine for communion services.

Today when the congregation celebrates communion, one can imagine that something of Bosman’s devoted spirit, his belief, a sense of sharing and blessings, whiffs up in that dense, beautiful muscat flavour.