Old but not cold – introducing the Certified Heritage Vineyards seal

Christa von Le Chevallerie, whether because of her German extraction or not, generally comes across as unsentimental but she was clearly displeased with the sand-mining trucks barreling along the backroads of the Paardeberg early this past Saturday morning.

Von Le Chevallerie is one of the leading growers in the area, her 20ha of vineyard suppling the likes of Chris “Butch” Alheit, Peter-Allan Finlayson of Gabriëlskloof, the Mullineuxs  and Donovan Rall. She’s making a go of things – relating how it was with no compunction that she put her grape prices up by some 40% to around R13 000 a ton in 2011 – but as is widely documented, very few of her fellow growers fare nearly so well and hence the temptation of making a quick buck from leasing land to sand miners becomes difficult to resist. 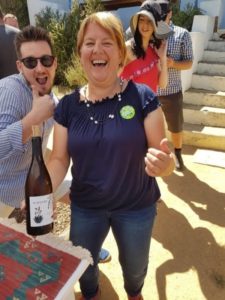 Von Le Chevallerie now has her own still wine from her vineyards, the Nuwedam Old Vines Chenin Blanc 2017, the first to bear the Certified Heritage Vineyards seal as devised by the Old Vine Project (read more here). Does she think that stickers on bottle necks will equate to more sales?  “Probably not. My reasons for wanting the certification were heartfelt – our old vines are a piece of history and we need to preserve them. It’s great to see independent winemakers doing something with blocks that growers had previously just about given up on.”

The Certified Heritage Vineyards is an exciting new initiative from the Old Vine Project, the body set up to preserve SA’s vineyards 35 years in age and older with funding provided by businessman Johann Rupert. It’s the outcome of a process under way for some 15 years, leading viticulturist Rosa Kruger utilizing a SAWIS registry to scour the land with a view to making sure the most interesting grapes didn’t get lost in the system but went to producers who could make notable wines out of them and consequently ensure appropriate remuneration for all parties.

“All I want is more good wine,” says Kruger. “Not always but very often, old vines make good wine and I think we’ve managed to increase the awareness of this. I also think we’ve brought about a greater appreciation for viticulture – that wine comes from a place and is created by people rather than it being the outcome of some abstract industrial process.”

André Morgenthal, in charge of marketing for the Old Vine Project, is pragmatic about what can be achieved. “We’re not going to single-handedly save the industry – after all less than 2% of plantings qualify as old vines. However, with the cost of establishing new vineyard so expensive, we’ve realized that vineyards which are now 20 years old are crucial and we want growers to farm with the vision that these vineyards should reach 60, 80 or 100 years old. “Plant to grow old” is a new mantra we trying to introduce.”

Morgenthal is realistic, too, about the new seal. “Will it up sales? I don’t know but it must give the consumer some sort of reassurance. It’s a multi-dimensional thing that goes beyond just wine quality. There’s a humanitarian aspect about keeping farmers in business and workers on farms and there’s a tourism aspect, too – people will come from all over to experience the unspoiled agriculture character of the land.”

Von Le Chevallerie, someone who has a personal stake in seeing the Old Vine Project succeed, has the last word: “It’s about celebrating our heritage and in the end, I think the love for what we do will draw the evil [of short-term profit seeking] out.”

The Old Vine Project recently held a workshop, manager Andre Morgenthal providing details of progress to date. Founded as a non-profit company in 2016, the Certified Heritage Vineyard seal was...

Though Christa von La Chevallerie went on to sell family farm Nuwedam on the Paardeberg to the Alheits in 2019, she will always have the honour of being the first...