On Merlot in SA 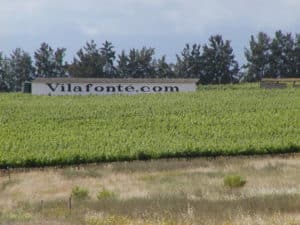 Yesterday a discussion on Merlot in SA facilitated by the South African Sommelier Association and led by renowned winemaker Zelma Long and wine-growing partner Dr Phil Freese, who are  co-owners along with Warwick’s Mike Ratcliffe of Vilafonté in Paarl.

Long began by saying that South Africa has a “treasure house” of terroir and hence there was “incredible potential” for Merlot to show itself well.

However, she then posed the question: “Does South Africa have a significant number of [top] winemakers working with Merlot?” She pointed out that it was quite a sensitive grape and it was beholden on producers to work with it “deeply” for best results.

Freese began his part of the presentation by saying that the challenge with high capacity sites like those typically encountered locally was to hold the vine back and limit vegetative growth which contributes to “green” flavours. Vilafonté vines hence have narrow spacing between them, resulting in some 5 200 vines/ha.

The challenge, moreover, was to achieve even ripening – whereas a vine was inclined to ripen its fruit at different stages as this meant “a better chance of a critter coming by and eating it” thus ensuring reproduction, the viticulturist’s challenge was to keep the variability of residual sugar in the berries as narrow as possible. “Being able to control vine performance is non-negotiable,” he said.

Martin Smith, Vilafonté’s widely travelled resident winemaker, said the challenge for SA Merlot was to get away from vegetal/spicy flavours.  He identified the two key obstacles to this as 1) an “insane amount of leaf-roll virus” and 2) uneven berry set resulting once again in grapes finishing ripening too far apart.

Why is even ripeness so important? Long said that it basically made for a wine more “potent and clear” in character. How to achieve this? Canopy management to ensure optimal cluster exposure followed by “fine tuning” in the form the removal of green and pink berries in the lead-up to harvest. Increased hang-time was an option as well but this was not ideal as there was always the danger of “vine collapse”. Smith also suggested that the inclusion in the final wine of Malbec and Petit Verdot, the two Bordeaux varieties which don’t present as overtly green, was also an alternative when it came to arriving at the ideal flavour profile.

One key point that all the speakers kept emphasising however was that virus should not be tolerated. “Some people contend that a little bit of virus is a good thing. Let  me disabuse you of that. No virus is helpful,” said Freese.

The 2017 vintage is much celebrated and with good reason. Mike Ratcliffe of Vilafonté yesterday arranged a blind tasting involving both the Series C and Series M from this vintage...