When Christoph Dehosse, now of The Vine Bistro at Glenelly in Stellenbosch, started the fine dining restaurant that was Au Jardin at the Vineyard Hotel in Newlands in the 1990s, I enjoyed a brief stint as the resident wine steward (by no stretch of the imagination was I a sommelier) and recall that Boschendal Grand Vin Blanc (80% Sauvignon Blanc with Riesling and a bit of Semillon) and Hamilton Russell Chardonnay-Sauvignon Blanc were firm customer favourites.

White blends have come a long way since then with André van Rensburg of Vergelegen starting to champion the classic Sauvignon Blanc-Semillon combination from the 2001 vintage while Eben Sadie pioneered what has fairly widely come to be termed the Cape White Blend with Palladius the following year, this maiden release a blend of 40% Chenin plus equal parts, Chardonnay, Grenache Blanc and Viognier, the alcohol 15% and the RS 3.8g/l according to the 2005 edition of Platter’s!

Chris Mullineux, of Mullineux Wines and a Swartland compatriot of Sadie’s, admits his original reaction to Palladius was “What the hell?” on account of how peculiar the concept of using Chenin in conjunction with Rhône varieties then seemed but soon saw the merits. “These blends provide fruit density and texture but also freshness,” he says. “In addition, they don’t bear comparison to too many other wines in the world and can be thought of as proudly South African.”

Mullineux relates that many of the Cape White Blends in the mid-2000s were rather big in terms of residual sugar and alcohol as producers attempted to avoid excessively lean and under-ripe wines at all costs. Local winemakers were quick to gain work experience at southern France wineries such as Domaine Gauby and Le Soula, and a growing appreciation of how to approach viticulture and winemaking in order to achieve wines of better balance came about. “Palate weight comes naturally in the Swartland – it’s a product of the old vines, climate and soils. It’s freshness we have to work on – we want to make wines that two people can polish off quickly and still feel energized,” says Mullineux. 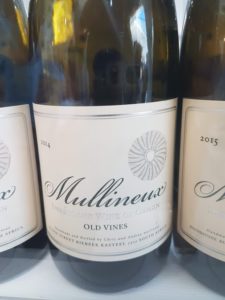 Mullineux and wife Andrea, who embarked on their own version of a Cape White Blend in 2008, recently presented a vertical tasting of all 10 vintages released to date (called “Old Vines White” going forwards). Whereas the 2008 was a blend of 86% Chenin Blanc, 7% Clairette and 7% Viognier, the 2017 is a more complex proposition, consisting of 65% Chenin, 13% Grenache Blanc, 10% Clairette, 10% Viognier and 2% Semillon Gris. “Chenin for backbone, Viognier for aromatic lift, Clairette to restrain alcohol, Semillon Gris for texture and saltiness and Grenache Blanc for acidity and ultimately to pull the wine together,” explains Andrea.

She also speaks of a “growing technical maturity” over time in the sense of understanding the whole process in terms of both viticulture and winemaking better but tasting the line-up, vintage variation seems an even greater factor than usual – 2013, for instance, was a cooler, very late vintage and this wine did seem relatively lean and a little awkward by comparison to its counterparts; 2016, meanwhile, was the earliest harvest to date on account of the drought and while a very pleasing wine, could be said to lack some detail. Stand-out vintages for me were 2011, 2014 and the current-release 2017. The latter rated 94 points on the 100-point quality scale earlier in the year (see here) and costs R290 a bottle from Wine Cellar – it sure ain’t your Premier Grand Cru of yesteryear.