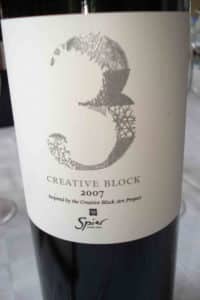 Here’s how the wines rated (average score in brackets):

The initiative was the brainchild of Johan Holtzhausen, owner of Hemel-en-Aarde Ridge property Mount Babylon and managing director of PSG Capital.

Some general observations: The fact that South African wines took the first three places proves once again that we can hold our own against some of the most celebrated wine regions in the world.

Some will no doubt argue that we were inclined to reward what we were familiar with, and hence why the French wines suffered.  I would counter that the French wines were largely mid-tier stuff (having been sourced so as to be roughly comparable in price) and not absolutely the strongest wines in terms of quality. The Chapoutier Gigondas was a particular disappointment, made in an “international” style being excessively ripe to the point of oxidised.

The competition is to be applauded for highlighting what Hemel-en-Aarde is capable of over and above its much acclaimed Chardonnay and Pinot Noir. My contention would be that it is unnecessarily restrictive to limit the competition specifically to “Rhône blends” (Holtzhausen’s own wine is in any event not strictly “Rhône” as it includes Malbec usually associated with Bordeaux).

Local winemakers are increasingly demonstrating a confidence that sees them dispensing with pre-ordained stylistic templates and we are starting to see some uniquely “South African” wines, Beaumont Vitruvian and La Motte Hanneli R being just two recent examples. In this respect, I think the resurrection of the “Cape Blend” with is prescribed minimum and maximum quantities of Pinotage is unfortunate – winemaking should not be according to recipe. Were the ambit of the competition to be broadened to included “non-conventional” red blends and take in the wines not just of the three Hemel-en-Aarde wards but the entire Walker Bay district and perhaps Klein River as well then the competition would start to be a really useful regional promotion tool. Somewhat ironic that in year one, honours went to Spier Creative Block 3, a wine that no matter how good, comes from fruit mainly grown in Paarl.