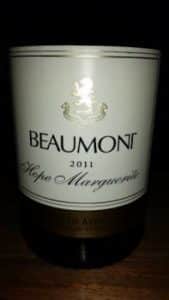 Are we making the most of Chenin Blanc? It may seem a strange question to ask at a point when the variety is receiving the most positive media coverage it has done in the past 20 years but that was the precisely the theme of a recent Cape Winemakers Guild technical tasting presented by Niels Verburg of Luddite Wines. It should not be forgotten that plantings have dwindled significantly, once over 60% of the national vineyard but now down to only 18%.

To explore where SA top-end Chenin is at, six pairs of wines, one leading local example and one from the Loire per pair, the wines tasted blind.
Here’s how I rated the 12 wines:

The Hope Marguerite 2011 from Bot River producer Beaumont was my wine of the evening as it was for most in attendance. In most instances, it was quite easy to tell the South African wines from the French but with the elegant and composed Beaumont poured next to the somewhat wild and woolly Coulée de Serrant from biodynamic pioneer Nicolas Jolly, it was more tricky.

The Cape Winemakers Guild has three new members, namely Richard Kershaw, Erika Obermeyer and Alex Starey bringing total membership to 43 - Kershaw is the only Master of Wine who...