SA wine: At a crossroads 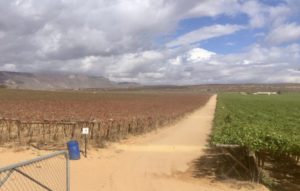 The drought has seen drastic water restrictions forcing farmers to make tough decisions when it comes to irrigation.

The most staggering statistic delivered by VinPro managing director Rico Basson at the organisation’s Information Day sponsored by Nedbank last week was that a mere 14% of producers are in a viable position or properly profitable while 37% are loss making and the rest are either low profit or break even.  Average return on investment in 2017 was less than one percent, the target of 20% by 2025 that VinPro has set in terms of the Wine Industry Strategic Exercise seemingly a very long way off.

Attempt to put a positive spin on the above and you could argue that with the wine industry cyclical by nature, we’ve just had a period of supply exceeding demand, leading to stagnant grapes prices. This causes inefficient producers to be shaken out of the market, the process we are currently witnessing, but demand will inevitably increase and this will result in improved profitability for the remaining producers as well as balance between supply and demand until the whole shebang begins again.

This doesn’t allow for a whole gamut of extraneous factors, however. The observation might be made that while we have some very canny operators at both the top and bottom of the market, those servicing the middle simply aren’t as good as our competitors. There is, of course, a country discount to be factored in – South Africa’ s overall image not what is should be relative to other wine producing nations, this resulting in buyers, consciously or unconsciously, disinclined to pay a premium or even parity for our wine.

Then, primary producers might insist to themselves  that they  must negotiate a more equitable deal with those higher up the supply chain such as distributors and retailers but you have a sense that the odds are, and always will, be stacked against them. That’s not defeatist – we are talking about the very nature of the free market economy which is premised on getting the best product at the cheapest price to the end-consumer.

One way to achieve profitability is to focus on scalability and branding, as Mike Ratcliffe of Warwick in Stellenbosch argued in his Information Day presentation. He noted that while the global economy is busy becoming more consolidated (Amazon’s acquisition of Whole Foods being a case in point), the South African wine industry is increasingly more fragmented, a proliferation of small-scale producers having occurred in the last 10 years or so. What is urgently needed therefore is “fewer brands, bigger brands and more focused brands” – Chocolate Block, for instance, an example of a local label able to stand proudly alongside world greats like Lafite, Opus One, Screaming Eagle and Cloudy Bay.

Ratcliffe conceded that the “small guys” or the “mavericks” have been key drivers of South Africa wine industry’s success in the last five or 10 years but still argued for producers to be more business-minded. “Not everybody wants to build a mega-company but iconic wines made in tiny quantities and sold too cheap [ultimately doesn’t help our cause]”, he said.

Contrary to Ratcliffe, I’m grateful for the independents out there who are motivated by love of the land and a life less ordinary as much as profit but perhaps that’s precisely how we go into this mess in the first place.

Vinpro approaches courts to overturn the ban on wine sales

Industry body Vinpro is set to approach the Cape High Court regarding the current ban on local wine sales. According to an official statement, urgent interim relief will be sought...