Is 2010 a long time ago? Apple released the first iPad that year. David Cameron became prime minister of the United Kingdom, and it would be him who six years later set in motion the Brexit referendum while back in South Africa, there was much excitement about hosting the FIFA World Cup, the tournament eventually won by Spain with The Netherlands the runners-up.

It was a significant year for me – I had resigned as editor of Wine magazine in December 2009, completed my notice period in January 2010 and then found myself freelance, not sure of how I was going to earn a living going forward but convinced that the rise of the Internet had deeply compromised old media. Wine magazine went out of print in September 2011, the brand subsequently acquired by me and business partner Jacqueline Lahoud and re-launched as a purely digital title in October 2014. 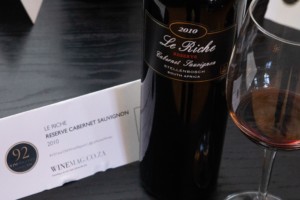 All this is to set the context for this year’s 10-Year-Old Wine Report, which came out last week. There were 74 wines tasted, with the best wine overall scoring 93 on the 100-point quality scale being the Port-style Cape Vintage 2010 from Stellenbosch cellar Delaire Graff and a further 28 of the line -up between 90 and 92. Plenty of debate ensued…

So many wines with scores in the mid-80s – surely a better result might have been expected? What’s the point of buying wine with a view to maturing it if it doesn’t get better? Is the emerging secondary market a scam? These and other questions were posed and all very pertinent, too.

Various retorts have been made, perhaps the two most relevant being that 1) vintage conditions in 2010 were dry and windy and therefore not optimal and 2) the advances in both viticulture and winemaking in South Africa over the last decade have been ongoing and steep and hence notable quality improvements.

Upon reflection, however, I’m inclined to wonder why we necessarily expect wine to improve with age. A wine that is kept for any length of time is being subjected to a deliberate process of decay, primary fruit dissipating as oxygen does its thing, phenolics and tannins in the case of red wine polymerizing over time, eventually becoming too heavy to be held in solution and dropping out as sediment.

The outcome is sure to be measured both in terms of sensory pleasure and intellectual interest, any particular wine moving from callow youth to soft and gentle maturity and eventually decrepitude, the fascination for the drinker being to ponder precisely where that wine is in its lifespan as much as anything.

We should probably all accept that most wines simply don’t have the intrinsics in terms of fruit, acidity and tannins to reward very long maturation. A small percentage may actually become more complex with time but even then what is essentially at stake is deciding how far the movement has been from its hypothetical unspoilt state on release to actual drinking whether that be five, ten or fifty years down the line.

It is understandable that the collector, invested both financially and emotionally, would want the reassurance that his or her wine is getting “better” with time but I think that this is ultimately to misunderstand the joy of older wine. The Le Riche Reserve Cabernet Sauvignon 2010 is a salient example – it rated 5 Stars on release in 2013 and is still among the top wines of the vintage when tasted now scoring 92. Is it a worthy investment? Most definitely. Will it have improved by 2030, whatever the favoured electronic device of the day is, however Brexit has turned out and whichever country is host of the FIFA World Cup that year? Well, that’s a moot point but I for one want to have that experience.

Back in May, the 2018 vintage of the Reserve Cabernet Sauvignon from Stellenbosch cellar Le Riche rated 92 points in the category report sponsored by multinational financial services company Prescient....