It’s seldom that I visit a winery at harvest time. First, because the people there are too busy for me to presume a welcome: Jancis Robinson describes wine writers as parasites on the wine industry, and while grapes are being picked and vinified I particularly feel the point of her admission. Secondly, if the welcome is forthcoming, it might too easily be as a worker, and I could find myself with aching muscles or sticky hands: both of which conditions I greatly dislike. (Writing is – just – preferable.) 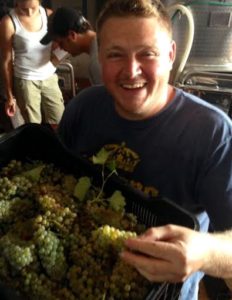 A few Saturdays ago, however, at 8 in the morning I turned up at the door of the cellar which Chris and Suzaan Alheit rent on Hans Evenhuis’s spacious farm Hemelrand, on a high ridge in the Hemel-en-Aarde. In fact I was expected, and hadn’t come far – Hans has a cottage just alongside the cellar, and at the last minute had offered it to me for the two nights of the Pinot Celebration, an offer I gratefully accepted (that’s a disclosure of interest, by the way). Hans also left me a bottle of his Vine Garden 2014, of which more below.

My rare harvest-time winery visits invariably find a happy scene, with lots of hard work, shaped by the human thrill of creation and transformation, and the human satisfaction of cooperation to a common end. So it was at Hemelrand. The first task of the day was to unload the chenin blanc from the (hired) refrigerated truck that had waited outside overnight, and to note the weight of each case before tossing the grapes into the press. As you can see from the photo, Chris was more pleased with these grapes than some of those he’s brought in in this desperate harvest for dryland vines.

The time of sticky hands was approaching, though Chris didn’t require my paltry efforts; rather, he offered a taste from the cloudy (and only slightly sticky) communal glass of freshly crushed juice. “What’s the Balling?” he asked his team, while checking the sugar solution with his refractometer. They were pretty close.

There’s an extent to which you can gauge the international reputation of a winemaker by the cellar assistants he attracts. Chris is doing pretty well. On his team this year are Alice Chidaine, from Domaine Francois Chidaine in Montlouis, one of the Loire’s great chenin terroirs, and Louis Reynaud from the family at Château Rayas, the grandest name in Châteauneuf-du-Pape, somewhat further south. The “New World” is represented by Dan Callan from Paso Robles in California, and home by the Alheits’ new assistant winemaker, Poenie Lourens (previously at Edgebaston, and more formally known as Franco) – we’ll be hearing much more about him soon, I reckon, as he has his own label: there’s a Howard John carignan which is fruity and tasty but riper than Poenie himself wanted, and a verdelho yet to be released, which is rather finer; but watch this space for more interesting stuff in the future.

But what of the wine grown in Hemelrand’s own vineyard nearby the cellar (dwarfed in scale by the olives which are the farm’s central concern, and give an excellent oil)? It’s planted to a mix of roussanne, chardonnay, chenin and verdelho, and the tiny first vintage, 2014 (just roussanne supplemented by grapes from elsewhere) was made by Chris and bottled, for the mailing list only, under the name Vine Garden – a pretty name, punning on the German weingarten, meaning vineyard. That’s the bottle that was in my fridge, and enjoyed by me a few days later. But, ripely charming and pretty though it was, the 2015, of which I’ve had a sneak preview, is much more vibrant, intense and convincing. It’s the first wine properly expressing this Hemel-en-Aarde Ridge vineyard, and also made in the Alheit cellar, of course. It’ll be released with the Alheit wines mid-year – and a worthy companion to the illustrious wines on that list.