One of my favourite bits of wine ephemera is a fading and well-worn beige T-shirt with a picture of a bunch of grapes on the front and the words “The Hemelrand Centre for Wine Excellence”. The back just reads “Harvest 2013”; it was in that year that it was given to me – and I assure you I felt appropriately honoured.

The “Centre” thus proudly and humorously invoked is the little winery on the Hemel-en-Aarde Ridge on Hans Evenhuis’s olive- (and in a small way grape-) farm, where Chris and Suzaan Alheit make the wines that have thrust them into local and international fame with a celerity previously unheard of in South Africa. In harvest 2013 their barrels had been joined in the winery by those of Chris’s long-time friend, star pinot and chardonnay producer Peter-Allan Finlayson of Crystallum, and the first wines made by John Seccombe for his Thorne & Daughters label.

The others have departed and the Alheits must feel a little lonelier these days, but in compensation their own wine production fills more and more of the Hemelrand cellar. Peter-Allan, with some trepidation I think, took over last year as winemaker at Gabriëlskloof in Bot River, where his wife Nicolene works too and her father Bernhard Heyns is co-owner. Of course, Crystallum is also made here now, as from the 2015 vintage. I’ll be writing more about my recent visit to Gabriëlskloof to learn what changes Peter-Allan is initiating (substantial and interesting ones they are!), but here I want to mention the birth of what I suppose could jocularly – though seriously – be called the Gabriëlskloof Centre for Wine Excellence.

For John Seccombe is now here too, making his wine in the capacious cellar, as is Frenchman Julien Schaal (moving from the increasingly full Paul Cluver cellar); and, I was pleased to learn, Marelise Jansen van Rensburg has also found a home here for her small but growing Momento label. It’s a home not far, of course, from Beaumont Wines, where she worked for seven years before last year deciding that she must work full-time with her own label. 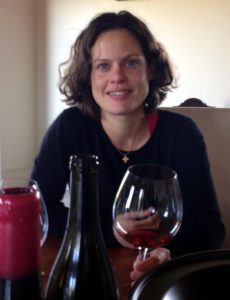 Marelise was there the morning I visited, and showed me some of her wines. The lovely Chenin-Blanc Verdelho 2013 has even gained some complexity and fascination since I tasted it nearly a year ago – and it still has plenty of life ahead, I reckon. The upcoming 2014 is perhaps an easier-going wine in some ways, and those interested in how chenin performs in the Cape will want to keep tabs on this one – it’s very good. It was also interesting to re-sample the elegant, fresh Tinta Barocca 2013. And I look forward to the release of the 2014 Grenache, from the Swartland. I never had the 2011, which was the last, which makes me wait particularly expectantly – partly because the Tinta Barocca seems to me not all that far from grenache in character, so it’ll be interesting to make the direct comparison of Marelise’s wines.

But really, it is the thought of all these marvellous, ardent young wine people working together, sharing their knowledge, understanding and excitement, in this case under the hospitable roof of Gabriëlskloof, that gives me the greatest pleasure and satisfaction. I only wish it happened more. Peter-Allan is very clear about just how much he learnt from working alongside Chris Alheit in their time together in the Hemelrand cellar. This sort of mutual striving, this shared adventure, this uncompetitive love for their work, this generosity and warm friendship and comradeship, is one of the best, most human things about the wine revolution in the Cape. Perhaps the very best thing, indeed. And we lucky wine-drinkers then get to share in it too.

The Landscape Series from Gabriëlskloof in Bot River showcases the property’s top vineyard sites along with some of South Africa’s best old vines. It’s an ambitious undertaking and I would...

The Projects Range from Gabriëlskloof in Bot River allows the winemaking team space to experiment with alternative fermentation and ageing methods. Tasting notes and ratings for the new releases as...