Tim James: A visit to Spioenkop 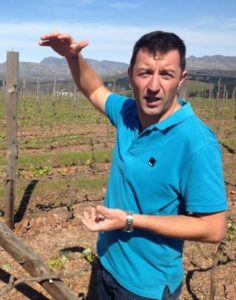 Koen Roose led me to a hilltop on his Spioenkop estate in Elgin. All around the vines were thrusting forth little fistfuls of bright green into the spring sunshine, but the wind was gusting mightily – Koen says it seldom ceases here, just changes direction occasionally to bring rain, instead of cool air from the nearby Atlantic. The weather’s great for vines, he says, not great for people.

From this point I got a better sense of the topography of the Elgin Valley than I’d had before. “It’s like a moon crater!” said Koen, and indeed it is. Nothing like the traditional idea of a valley (but, then, nor is Constantia). A ring of high hills formed the horizon circled around us, revealing Elgin as a high plateau, full of rises and dips – an extraordinary variety of aspects on which to grow grapes (not to mention apples and pears, enormously the dominant fruit crop of the region and – at least for now – rather more profitable than wine-grapes).

The soils are various too, and change bewilderingly in a short space. Koen talked knowledgeably of their make-up, but anyone can see the variation in texture and colour – sandy to rocky, purple-blue to red. Terroir is Koen’s concern, and he speaks with passion and sensuality of it, using metaphors and images of vine growth and development relating them to the human body. It’s why he’s here, all the way from Belgium, to express the subtleties of soil, slope and sunlight that he sees offered in Elgin. I admire his rigour and commitment, and the hard work he has invested here, and I much admire his refusal to use any irrigation: even when establishing his vineyards, the vines had to struggle if they were to survive and prosper. Those that did (and it was painful – and expensive – to lose a small percentage) will surely, as he says, grow old marvellously, reaching deep into Elgin’s earth, to the clay.

We walk around his three pinot noir vineyards. Furthering the allusions of “Spioenkop” (that famous Boer victory in the British war against the Boer republics), they have names relating to colonial South African military and political history: General Botha for the Boers, General Warren for the British, with the third named for the peacemaker, Ghandi. There’s a handsome drystone wall around one of them, forming something like a Burgundian clos, built from the stones that had to be cleared to allow the planting of vines.

Because they will be very different, Koen plans to make and bottle individual wines from the three vineyards when they mature, but his maiden Pinot Noir (2013) amalgamates them. It’s a very decent wine, with the lack of complexity that one might expect from young vines. But the aim, clearly, is depth and expression rather than simply fruity, jammy charm; there is an earthiness, with spice and herbs (thyme, perhaps) that speak, let’s hope, of the vineyards, though the modesty and restraint, even austerity, also speak of the winemaker’s aesthetic. This is surely a pinot to watch – well, potentially three pinots to watch!

In some ways the Spioenkop Pinotage 2013 – elegantly structured, in a lighter style than many but not lacking intensity, with both gentleness and that element of austerity – is an even more expressive pinot! Certainly a fine and characterful example, and probably my favourite of Koen’s wines, which is saying a lot, given the great qualities of his Riesling, Chenin and Sauvignon Blanc.