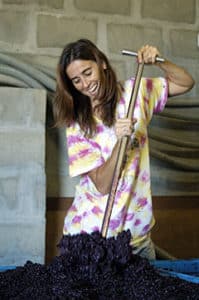 The release of the excellent new Capensis Chardonnay, and concomitant talk about the purchase of a Stellenbosch wine farm by the US company Jackson Family Wines, prompted thoughts of the extent of the American investment in Cape wine since 1994. The influx of star-spangled dollars – and star-spangled wine-people – has been greater than is readily realised and, though I’m probably not remembering them all, I suspect that US investment has been greater than any other country’s.

The first American purchase (I think) – in that auspicious year of 1994 – was Dr Lance Nash’s rather precipitate long-distance acquisition of a farm he knew little about, on the back of Paarl mountain, not long after his first visit to South Africa. Fortunately, daughter Mary-Lou dropped by just in time to cope with the 1995 harvest. Happily, she stayed, initially undergoing a major culture shock in dealing with Windmeul Co-op (not only a foreign language, but no women allowed at the harvest party!), then founding an own-label, Black Pearl, with a first bottling, out of a very rudimentary cellar, in 2001. A steep learning curve it was for someone who knew “absolutely nothing” about winemaking or grape-farming, achieved through unstinting determination.

I reckon these dates make Mary-Lou the Cape’s first US-national winemaker (and viticulturist), but the remarkable thing is that she was far from being the last. Another American investment (a joint venture with Mike Ratcliffe of Warwick) brought the illustrious Zelma Long, with viticulturist husband Phil Freese. Also to Paarl, in fact, where they bought a farm and established Vilafonté, the wines being made in Stellenbosch. In many ways this was the opposite sort of arrival from Mary-Lou Nash’s: carefully considered, well-funded, and with brilliant expertise behind it. But the same sort of determination that, if we consider a few more arrivals, we can see as something clearly not uncommon in American women.

Consider Californian Samantha O’Keefe, who’s shown an almost frightening degree of strength and will in making a success of Lismore Estate, her isolated and astonishingly beautiful property near inland Greyton. She gave up an executive career in the television industry and in 2003 decamped to this point on the opposite side of the Earth. In South Africa, as she once pointed out to me, she has become “wife, mother, owner of a farm, divorcée…”.  “And this, Lismore, is my home. Here I have created something. I make my wine, from my vines that I planted and established.”

Another American woman who has invested much financially and emotionally is Ginny Povall, who came here first in 2005 and responded immediately to the “feel” of the place. After some exploratory visits, she resigned her high-flyer New York job in 2007, and made the commitment. In the Devon Valley she bought a flower farm, now also with five hectares of vines, but most of the grapes for her Mary Delaney Collection wines are bought in – most famously, chenin blanc from the Skurfberg area near Citrusdal for Botanica. Again, Ginny has been proving the feisty bravery of American women in facing many challenges in a new country.

Add in Andrea Mullineux to complete a splendid array of American women give much to Cape wine and its culture.

The financial side of US investment in the local wine industry saw the significant purchase of Haskell Vineyards by Preston Haskell in 2002. I’m not sure whether the acquisition of Glen Carlou by the Hess Collection counts as American or Swiss. More recently, and even more feted, was the entry of Charles Banks and his Terroir Capital, with the purchase of Mulderbosch in Stellenbosch and Fable (formerly Tulbagh Mountain Vineyards) in Tulbagh.

Indeed, the Americans are here, and all making a signal and welcome contribution to Cape wine. It doesn’t even feel at all like an imperialist takeover…

Grapes from a 1957 vineyard on Citrusdal Mountain, this Chenin Blanc as made by Ginny Povall is an essential purchase every year for connoisseurs of the variety. The 2020, spontaneously...

Capensis is the joint venture between Barbara Banke of US wine company Jackson Family Wines and Antony Beck of Graham Beck Wines, the focus exclusively on Chardonnay and Chardonnay designed...