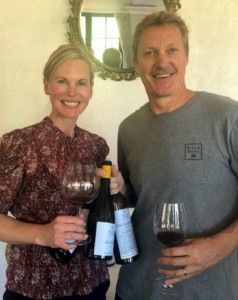 In April 2013 I visited Craig and Anne Wessels’ small Klein Hemel farm in the Upper Hemel-en-Aarde (the first journalist to do so, I like to think; I went on to the Alheit cellar at Hemelrand, so it was an auspicious day: I called my report “Ripples of revolution in the Hemel-en-Aarde”).  Craig and Anne, I wrote, “carefully make two Restless River wines”. The then-current release of their single red wine was a mature 2007 – a “pure-fruited, soft but structured cabernet sauvignon that speaks its origins in a different language from most Stellenbosch equivalents”, I reported. The current Chardonnay was 2008 – “full, rich and characterful”.

Clearly, demand for the wines was not then as eager as it has now become, although the wines are still released later than most. This week saw the launch in Cape Town of the 2016 Main Road & Dignity Cabernet Sauvignon and the 2017 Ava Marie Chardonnay. Both wines are now named for the vineyards on the farm (two and one respectively) that they express so well. And Le Luc Pinot Noir has joined the portfolio, now with the second release, 2017, off vines planted in 2013. There’s also a wine called Wanderlust, but, somewhat experimental, it changes each year – there was a 2017 Grenache, the 2018 is … I’ll tell you shortly.

I could probably use just half a dozen or so words and thereby give the essence of all four of the lovely Restless River wines: Light-feeling, fresh, nicely grippy, elegantly restrained, properly dry; those epithets apply to all. And if especially the character of the Chardonnay has developed with time – still characterful, but less full and rich – so has Craig Wessels, primarily responsible for the wine-growing: where back then he was a little uncertain and tentative with his passion, now experience has given him added confidence, through increased understanding, in his ability to work (minimalistically) with the fruit the climate and his different patches of earth provide him.

The Wanderlust is a Sauvignon Blanc off a now-defunct Hemel-en-Aarde Ridge vineyard. They had great trouble getting it passed in that category, and I’m mildly surprised they succeeded at all. There’s a little sweet aromatic that is reminiscent of Sauvignon, but three days or so of skin contact seem to have hit the grape’s typicity on the head. Plenty of flavour, but the point is the texture and those general Restless River characters I mentioned above, all making for a very satisfying drink – alone or with food. At something well over R300 a bottle it’s hardly something that most of us can afford, but if you have the money (and can appreciate un-fruity wines of quality) you really won’t be disappointed.

Le Luc Pinot Noir has the lightness one might expect from young vines, yet it really has some interest to it, and I bet than in five, certainly ten, years’ time this vineyard will produce splendid wine. There’s an element of perfumed charm to the clean purity, but it’s more savoury than fruity. The tannins are deftly firm but restrained, the acidity lively, the 20% new oak seems merely an enhancing element; it’s altogether balanced. At something over R400, the price seems somewhat excessive now, even for this very pleasing wine, given the Newton Johnson Family at about the same price, but in a few years the label should deservedly belong in that ambitious bracket.

Ava Marie Chardonnay 2017 is similarly priced, but more obviously deserving of it.  After five harvests of the vineyard to achieve the desired components, there’s minimal cellar intervention in terms of additives and the like. But the wine is carefully guided by Craig (wholebunch pressing, oxidative handling, generally avoiding malolactic fermentation, kept on lees 11 months before three months of the blend in steel tanks before filtering and bottling, and then 18 months before it gets to us). Hints of sweet fruit, but it’s really about almost-ethereal elegance (tautness rather than leanness) and subtlety of flavour. One of the most restrained local chardonnays without losing presence and flavourful vigour, and thus one of the more triumphant.

The Cabernet 2016 might not appeal to those committed to the power and ripe richness of Stellenbosch (or Napa or modern Bordeaux) cab, but if you value comparative lightness and lively elegance, and are not horrified by a herbal, even herbaceous element, this cooler-climate version should give much satisfaction. It does to me, though I’d like this 2016 to wait a good few more years in bottle; it’s still pretty youthful, even a touch raw. Probably closer to R500 than R400 at most outlets – when you can find it.

Restless River is amongst the most surprising – and therefore one of the most pleasing and important – achievements of the rolling Cape wine revolution of the last decade: terroir, imagination and flair all play their part in making something new and exciting.

Ava Marie Chardonnay 2017 Approximate retail price: R395 Matured in 500-litre barrels and amphorae for 12 months. Pear, lemon and a hint of oatmeal on the nose and palate but...