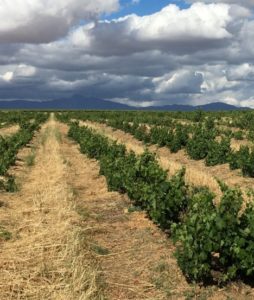 There’s a wine in Tremayne Smith’s The Blacksmith range called, rather alarmingly, These Old Bones. It’s a truly complex, exciting and lovely wine, the one I most enjoyed and admired at a recent tasting of Blacksmith new releases (including the Four Horsemen wines which I wrote about last week). All in this range of naturally made, fresh, textured and vital wines are highly recommendable, but I keep on getting sidetracked into detail before I can write generally about them. This time by These Old Bones, and especially the Paarl vineyard that produces it. Availability details first: Just 850 bottles of the 2018 were made and should sell for closer to R300 than R200 – and worth every cent – but I’m not sure from where; it’s not even yet listed on the website of the distributor, Publik.

Officially the vineyard is of Chenin blanc, planted in 1977 as bushvines on what viticulturist Jaco Engelbrecht describes as the break between shale and granitic soils in the Voor Paardeberg –something pretty interesting in itself. Jaco started working with the vineyard about five years back (it needed a lot of rejuvenating), and he says he soon became aware of something varietally very odd. Most of the vines are indeed Chenin, but there’s also of lot of crouchen blanc (“Cape Riesling”) and he and Eben Sadie (who also takes grapes from the vineyard) have also identified some palomino, Semillon and Muscat d’Alexandrie – and maybe a few gewürztraminer or bukettraube vines. And a few others as yet unidentified. Not to mention a few cabernet sauvignon plants that have been pulled out and a cinsaut whose days are severely numbered. Any gaps in the rows from dead or removed vines have been interplanted with mostly Chenin. But, says Jaco, “this year we aim to interplant some more Palomino, and I want to add a few Grenache blanc vines”.

Jaco is clearly hugely excited by this mix-up. It is, he says, as far as he knows “the only REAL field blend vineyard in South Africa”. There are some vineyards with more than one variety – including, for example, those producing grapes for Sadie’s ‘T Voetpad and Skerpioen; and Beyerskloof actually have a wine named Field Blend, of cabernet and merlot: “a single vineyard wine whose grapes are grown, harvested and vinified together”. And Eben Sadie and Jaco are this year planting a new vineyard on the Sadie home farm, with eleven white varieties (destined for Palladius) on little more than a hectare – but they will be in identified rows, according to the more common way of planting mixed vineyards.

But at the Old Bones vineyard, says Jaco, “it seems that someone in 1977 took around seven varieties and just mashed them up in the shed and told the people: ‘Plant this’. There are no varietal rows or sections. A true field blend.” And he’s delighted (and so am I by what it produces in the bottle). “Everything (except the young vines) are harvested in one go. They don’t ripen the same time, hence the beauty of these type of vineyards. Some old Chenin blanc grapes are golden in colour and very ripe, while the crouchen blanc sits almost green with high natural acidity – a story almost too good to be true.”

Field blends like this are rare, particularly in the New World, as control over picking according to optimal ripeness for each variety has become a mantra. Some old Zinfandel vineyards in California contain other varieties, and a few winemakers there, like Paul Draper of Ridge, are firm believers in the strategy of interplanting. And old Europe – most notably Portugal – still has some very old vineyards of thoroughly mixed varieties, although many have been replanted to more controllable patterns: one century-old port vineyard in the Douro valley comprises, it is said, 47 different grape varieties. (See Maragaret Rand’s excellent World of Fine Wine article for more on this and on the whole concept of field blends.)

If Jaco has his way, there will be more field-blend vineyards and wines in the Cape. “They are amazing. Maybe a hard sell in the market, but amazing. I am lucky to work with a lot of people that embrace outside the box thinking, not just winemakers, but farmers and owners too.” Working with sympathetic farmers and with winemakers like Duncan Savage and Pieter Walser (BLANKbottle) as well as Eben Sadie, he’s already planted a few such vineyards (some completely mixed up, some with the different varieties in rows), and more are on the way.

Jaco is also “mixing stuff up” in some established vineyards with gaps that need filling, interplanting old Chenin vineyards with Semillon, palomino and grenache blanc. Why? “We have enough monotone and monoculture vineyards in South Africa”, he says, “and for someone like me (and most of the people I work with) mono means boring. Sure we can’t mix up the whole South African vineyard scene, but someone has to mix up something.”