Two very prominent positions are open in the winelands – who’s going to fill them? 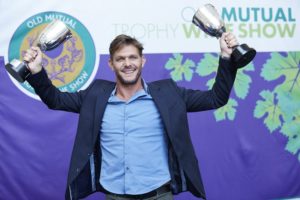 Who will replace Miles Mossop upon his departure from Tokara?

It’s been a helluva year for Tokara so far – the single best achiever at the 10 Year Old Wine Awards announced in April with three out of the 19 wines to rate 90-plus on the 100-point scale (these being the Elgin Sauvignon Blanc 2007, Chardonnay 2007 and Director’s Reserve Red 2007); the Reserve 2013 rating 91 in the Prescient Cabernet Sauvignon Report announced in May; the trophy for most successful producer overall at the Old Mutual Trophy Wine Show in May, this achieved in part because of a gold medal for the Reserve Collection Stellenbosch Chardonnay 2015 plus the best Sauvignon Blanc Semillon trophy for the Director’s Reserve White 2015; and finally a rating of 93 for the Director’s Reserve Red 2013 in the Cape Bordeaux Red Blend Report announced yesterday.

General manager Karl Lambour, who took over in July last year, should be all smiles except winemaker Miles Mossop recently handed in his resignation after 18 years, the 2018 harvest set to be his last as part of the Tokara team. Needless to say, speculation is rife among industry insiders as to who Mossop’s replacement will be.

Our biggest producer-wholesaler Distell finds itself in a similar predicament after Razvan Macici departed suddenly in March of this year. Macici, of course, achieved much in a 15-year stint as Nederburg cellarmaster and much was expected of him in his new role which he assumed in 2015.

Candidates for both positions don’t spring readily to mind. Johann Fourie, who did so much to establish the reputation of the KWV’s The Mentors range, moved to Benguela Cove Lagoon Wine Estate towards the end of last year and appears set for a long stint at this ambitious new project. Wim Truter, meanwhile, was cellarmaster at Distell-owned Fleur du Cap for perhaps not even a year before jumping ship to replace Fourie at KWV.

JD Pretorius of Steenberg is presumably not going anywhere with the news that long-serving general manager and Cape Winemakers Guid member John Loubser has left to give greater attention to his Silverthorn bubbly brand.

Gottfried Mocke, who just about single-handedly established the reputation of Chamonix, presumably now has his dream job at Boekenhoutskloof while Andries Burger is literally part of the Paul Cluver family, being married to the oldest Cluver daughter Inge. Kanonkop has only ever had three winemakers, Abrie Beeslaar the current incumbent so it would be an act of sacrilege were he to move.

The likes of Chris Alheit of Alheit Vineyards, Peter-Allan Finlayson of Crystallum, David Sadie of David & Nadia, Donovan Rall of Rall Wines and Duncan Savage of Savage Wines let alone Eben Sadie or Adi Badenhorst are all resolutely independent so no solution there.

Who does that leave then? On the face of it, Morné Vrey of Delaire Graff, Sjaak Nelson of Jordan, Matt Day of Klein Constantia, Matthew Copeland of Vondeling and Nick van Aarde of Warwick all look pretty fulfilled (and probably well remunerated) in their current positions but every man has his price and the Tokara headhunter has presumably approached at least some of them. As for the Distell position, how about Coenie Snyman of Rust en Vrede? After all, his wife Caroline is the company’s marketing director Southern Africa.

Including a 13% portion fermented and matured for five months in old, larger format barrels, the Sauvignon Blanc from Tokara's Elgin is very well realised. The nose shows notes of...

The maiden 2011 vintage of the MCC Blanc de Blanc from Tokara was a fine offering but the 2012 seems altogether richer and perhaps a bit listless. From Elgin Chardonnay,...

Telos 2015 – R4 200 a bottle – from Tokara in Stellenbosch. Vanity project? Another well-meaning but half-baked effort to elevate the reputation, and in conjunction, the price of South African...