The seventh annual Concours Mondial du Sauvignon took place in DO Rueda, Spain on 4 and 5 March –over 900 entries from 26 different countries with some 70 judges officiating including yours truly. The CM du Sauvignon is an offshoot of the bigger wine competition Concours Mondial de Bruxelles and is owned by Belgian company Vinopres. It exists, not surprisingly, to promote Sauvignon so the fact that it was held in Rueda this year was somewhat curious as the region has some 700ha of Sauvignon Blanc planted compared to over 10 000ha of Verdejo.

What to make of Rueda and its primary grape Verdejo? About two hours’ drive northwest of Madrid, the region is Mediterranean in terms of latitude but its high altitude – about 750m above sea level – make it subject to Continental climatic conditions: long, cold winters and very hot summers. It should be noted that Verdejo is prized by local growers on account of its ability to retain its acidity even when temperatures approach 40⁰C during the growing season.

Though the grape has been grown in the region for over 10 centuries, its modern history is short. Not unlike South Africa, Spanish politics were particularly unhappy during much of the 20th century, the dictator Franco ruling from 1939 until his death in 1975. As he aged, however, his power began to wane and reforms were gradually introduced across all sectors of society. It was in the early 1970s that major Rioja producer Marqués de Riscal set up operations in Rueda with a view to introducing white wine to its portfolio, and the region would subsequently gaining official status as Denominación de Origen in 1980.

Whereas the wines had previously been oxidative and by all accounts quite rustic, modern winemaking techniques were now brought to bear and a new era of aromatic, fruit-driven, unoaked dry white had begun.

So why was Sauvignon Blanc introduced to the region at all? I suspect that this was probably driven by the marketing mavens who thought that Sauvignon would be an easier sell in international markets. The thing is Verdejo, while not unlike Sauvignon in being very expressive on the nose, tends to be more satisfying on account of being more substantial on the palate and hence why it has staved off the challenge presented by Sauvignon in the region.

That said, most Verdejo is unoaked and sells for between €5 and €10 a bottle. Perfectly respectable but there’s clearly a lot of deliberation among the more progressive producers in Rueda as to how they can add extra interest with a view to charging more and improving their margins. 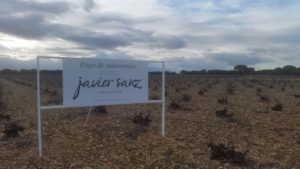 Rueda vineyards are located on the banks of the Douro river and its tributaries and soils are essentially alluvial. In some instances, vines are pre-phylloxera as the soils were so sandy that the pest was unable to tunnel between the vines (we visit one vineyard owned by Bodega Javier Sanz registered in 1853). As is the case with Chenin locally, there’s an appreciation that working with these old vines might be what bestows greatness upon the region.