Will Assyrtiko do well in the Cape?

Is South Africa’s national vineyard too diverse or not diverse enough? On the one hand, the top 10 most planted varieties (Chenin Blanc, Colombar, Cabernet Sauvignon, Shiraz, Sauvignon Blanc, Pinotage, Chardonnay, Merlot, Ruby Cabernet and Cinsault in that order) comprise 86% of all plantings according to SA Wine Industry Information & Systems (SAWIS) but on the other hand, there are some 93 other varieties making up the rest.

Make that 94 with Jordan Wine Estate in Stellenbosch set to plant Assyrtiko, the grape associated with the Greek island of Santorini, the soils famously igneous, the climatic conditions hot and windy. Jordan has selected a site roughly approximate to Santorini – the soil consisting of broken-up granite rock, the aspect north-facing, the Southeastern wind a regular phenomenon – and just one hectare will be planted for now.

Will Assyrtiko do well in the Cape? The variety is to Greece what Albariño is to Spain, Grüner Veltliner is to Austria and Nero d’Avola is to Sicily but what sets it apart is that it has barely travelled. Wines from this variety have become super-hip in recent times but the grape has remained largely constrained to Greece, although Jim Barry in Clare Valley, Australia has made it commercially since the 2016 vintage.

Yesterday, Gary Jordan hosted a tasting of eight leading examples of the variety for trade and media with a view to exploring style. Wines in the line-up included: Hatzidakis Cuvée No. 15 2017, Hatzidakis Nykteri 2017, Gaia Thalassitis 2017, Gaia Wild Ferment 2017, Vassaltis 2017, Vassaltis Barrel Aged 2016, Karamolegos Ancestral Vines “34” 2017, all from Santorini and the 2017 from Jim Barry.

It was, for this taster at least, a somewhat perplexing experience. Aromatically, the wines often appeared quite neutral – vaguely earthy, or dare I say mineral, but not very expressive beyond that. What particularly attracts Jordan to the variety is its ability to retain high acidity despite growing in hot conditions and just about all the wines were fresh to the point of searing. Flavour-wise, they typically showed distinct citrus while the finish is typically either pithy or salty.

Given the variety tends to make quite severe wines, it seems producers are inclined to temper this via winemaking technique and hence the use of either wild ferment or barrel maturation or both. Based on this small sample, however, it would appear that too much intervention in the cellar forces the variety in a direction it doesn’t want to go – the Vassaltis Barrel Aged 2017, which was matured in a combination of older oak and acacia for four and a half months, just looked clumsy. 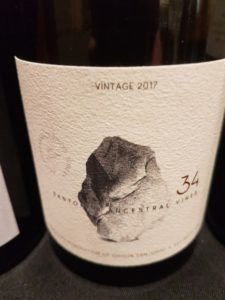 My stand-out wine of the tasting was the Karamolegos Ancestral Vines 34 2017, the “34” referring to the 34 centuries of continuous viticulture on the island. Grapes for this come from vineyards exceeding 120 years of age, maturation lasted nine months in tank although 10% went into third-fill oak, lending perhaps just the right amount of extra weight and texture.

On the nose, a subtle floral perfume as well as lemon and green apple while the palate was marked by piercing acidity and a salty finish, making for a most striking wine (rating: 91/100). One of the many extraordinary characteristics of Assyrtiko is very low pHs at relatively high alcohols, this having a pH of 2.9 and abv of 14.3% – this only to become properly drinkable in 2029?

After the Jordan tasting, I reflected that maybe Assyrtiko belongs to Santorini and only to Santorini and shouldn’t be propagated elsewhere but of course that just isn’t the way the world works. In South Africa, Newton Johnson and now Nederburg and Springfield make Albariño, Diemersdal makes Grüner Veltliner and Bosman Family Vineyards make Nero d’Avola, all relatively successfully. With Assyrtiko’s star very much in the ascendant, someone was bound to have a crack and why not Jordan?