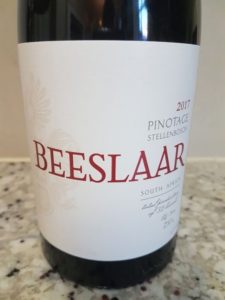 When considering Pinotage’s potential for greatness, the wine by Abrie Beeslaar under his own label has in relatively short space of time become as important a reference point as anything he makes for the great Stellenbosch property that is Kanonkop.

Current-release is the 2017, the sixth since the maiden 2012, and it is again superbly well crafted. 2017 was the third consecutive year of drought in the Cape Winelands, Stellenbosch receiving 450mm of rain, significantly less than the long-term average of 750mm but every indication to date is that the district still produced some very fine wines.

Fermentation took place in open top concrete tanks with punch downs every two hours, while maturation lasted 20 months in 30 French and two American oak barrels. The nose shows a little floral fragrance before cherries, plums as well as earth, spice and a hint of chocolate. On the palate, the fruit is pure and sweet, with no shortage of freshness despite an alcohol of 14.5%, the tannins firm but fine. It’s luscious in the best sense, sleek, the production values suitably high given an approximate retail price tag of R500 a bottle.