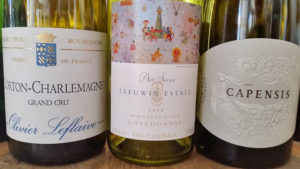 A trio of alright Chard.

Yesterday the launch of a new ultra-premium Chardonnay, the product of a joint venture between Barbara Banke of US wine company Jackson Family Wines and Anthony Beck of Graham Beck Wines.

Viticulturist is Rosa Kruger and winemaker Graham Weerts, who started out at DGB but was lured to the States by the late Jess Jackson in 2004. 60% of grapes come from a farm called Fijnbosch situated above Bartinney in Stellenbosch, 20% from Robertson (some 18 rows on lime soils) and 20% from Kaaimansgat in the Overberg so not a “terroir wine” but rather a “billboard for what the Western Cape can offer”.

Total production is 1 000 12-bottle cases and the wine has a suggested retail price of R935 a bottle here (and surpassing icon range Uva Mira 2013 at R600 a bottle as the most expensive in the country) or $85 in the States. Why not a Capensis Chenin Blanc? You have to conclude that the world is simply not ready for Chenin at close to $100 a bottle…

This is no speculative undertaking, Weerts confident enough when launching the wine to show it blind against a top stuff from Burgundy and Australia. My tasting notes and scores below:

Olivier Leflaive Corton-Charlemagne Grand Cru 2012
A pronounced note of reduction on the nose but also pear, white peach and citrus. Lean and savoury with a good line of acidity. Carries oak very well. Weightless intenstity but a bit ungiving at the moment.

Leeuwin Art Series Margaret River 2011
Lime and lemon, flowers and a hint of leesy character. Sweet on entry but a nice pithy finish. Rich and full but balanced – quite a flamboyant wine.

Capensis 2013
Quite a shy nose but fabulous intensity on the palate. Sun-kissed fruit, lively acidity and carefully judged oak – this wine has heft without being ungainly. Archetypal in showing lemon, some appealing leesy character and attractive oak-derived notes of vanilla and spice. An exceptionally, long pith finish.

Capensis is the joint venture between Barbara Banke of US wine company Jackson Family Wines and Antony Beck of Graham Beck Wines, the focus exclusively on Chardonnay and Chardonnay designed...

Burgundy, other Chardonnay and score inflation

Earlier this week, Garry King of Tonnellerie Saint Martin hosted a tasting for existing and prospective clients of wines from leading producers elsewhere in the world who use the cooperage’s...