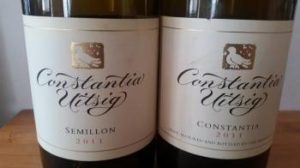 To blend or not to blend?

When I reviewed the 2011 vintages of both the single-variety Semillon and the white blend from Constantia Uitsig for the 2013 edition of Platter’s, I rated the former 3½ Stars but added the qualification “typically requiring a few years to unfold” and the latter 4½ Stars. How are these two wines looking five years on from vintage?

Constantia Uitsig Semillon 2011
Barrel fermented and matured for seven months in French oak, 20% new. Peach, thatch, white pepper and a slight nuttiness. Rich and broad with moderate acidity. More about texture than aromatics or flavour but not unsatisfying – undoubtedly better for some bottle maturation but probably ready to drink.

Constantia Uitsig Constantia White 2011
60% Semillon, fermented and matured for seven months in used French oak and 40% tank-fermented Sauvignon Blanc. Wonderfully complex nose of lime, tangerine, thatch, honey, white pepper, sea breeze and some leesy character. Beautifully balanced on the palate – concentrated fruit but not too rich or thick textured and possessing plenty of detail. A case of the whole being greater than the sum of its parts and should be good for a while yet.