When Bruwer Raats set about establishing 0.2ha of Cabernet Franc and 0.6ha of Chenin Blanc on his Polkadraai property during the mid-2000s, his point of departure was “quality by design” which saw him undertake the most rigorous soil preparation, careful selection of clones and high density plantings (1 x 1.2m – the equivalent of 8 000 vines/ha). The resulting wines are proving to be among the very best to have emerged in the modern era of the South African wine industry.

While the maiden 2014s were excellent (see here) but the newly released 2015s, which benefit from what many consider to be one of the greatest vintages of all time, are that little notch up. Tasting notes and ratings as follows:

Eden High Density Single Vineyard Chenin Blanc 2015
Price: R650
Matured for 10 months in three 300-litre barrels, one new, one third-fill and one fourth-fill. Top notes of fresh herbs, hay and spice before pear, peach and some leesy complexity. The palate shows astonishing fruit concentration, a lovely line of acidity and a pithy finish. Layers of flavour and great composure. That much more precise than 2014. 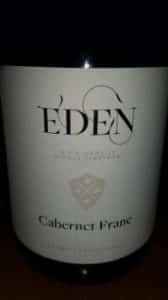 Eden High Density Single Vineyard Cabernet Franc 2015
Price: R1 600
5% whole bunch fermentation. Matured for 8 months in new oak before a further 10 months in old oak. The nose is mesmerizing with notes of red and black fruit, a perfume which goes beyond floral and is almost musky, a fleeting note of mint, pencil shavings, earth and oyster shell. The palate shows incredible depth and length without being weighty and there is a real sucrosity to the fruit which is to say a sense of purity and juiciness rather than the presence of residual sugar. Masterful.

The Eden vineyards are two blocks established by Bruwer Raats just behind his Polkadraai house in the late 2000s with the aim of exploring what improvements in quality might be...