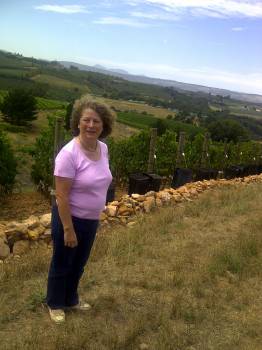 I’m inclined to give many organic grown wines a sympathy vote, which is to say overlook mediocre quality on account of the worthy intentions of the producer. No need for that in the case of Elgin Ridge (certified as of the 2012 vintage).

Brian and Marion Smith sold their IT business based in southwest London at the end of 2006 and bought a small property in Elgin in April 2007. 4ha of vineyard were established between 2007 and 2009, plantings including mainly Sauvignon Blanc but also Chardonnay, Pinot Noir and Semillon. As for why they opted to farm organically, there’s no particularly elaborate philosophy behind this other than to do good by their soil.

What was intended to be a “relaxing retirement project” turned out to be “bloody hard work”, says Brian. You get the impression, however, that they’re enjoying every minute of it and they concede that setting up their operation was far easier than it might have been elsewhere. The respected Kevin Watt advises on viticulture while Niels Verburg of Luddite is their winemaking consultant. “You’d never be able to get that level of cooperation in France,” says Marion.

To taste, the three vintages of Sauvignon Blanc made to date.  Though the vines were only 20 months old in 2009, intensive treatment with Seagro organic fertiliser and chicken manure pellets facilitated a small crop and production has grown steadily from there.

Tasting notes and scores as follows:

2009:  Overt but not totally displeasing mercaptan character as well as granadilla on the nose and palate. Good palate weight, tangy acidity. Something of a guilty pleasure. Score: 15.5/20.

2011: Very primary on the nose. Green and yellow apple as well as subtle pepper on the palate. Moderate acidity. The most technically correct to date. Score: 16.5/20.

Perhaps not classic South African Sauvignon Blanc, these wines nevertheless have real interest value. Whereas Elgin Sauvignon Blanc can be particularly green and lean, Smith opts to pick later than many of his counterparts – he realises he’ll always be fighting high alcohols (14.2% in the case of the 2011) but prefers the greater substance which results.

The 2011 is set to sell for R90 a bottle from the farm but Smith advises that he exports up to 70% of production. “UK retail price is around £11.99 a bottle but most is sold in restaurants and hotels – I’ve seen it selling for £38 a bottle at the Royal Opera House”.

Elgin Ridge, certified both organic and biodynamic, has been acquired by Radford Dale from founders Brian and Marion Smith. The couple purchased what was then a neglected apple farm in...

Consumers of unwooded Sauvignon Blanc are, as we all know, price sensitive. How then are cellars to fetch a premium for this variety? Elgin Ridge do this by combining Sauvignon...