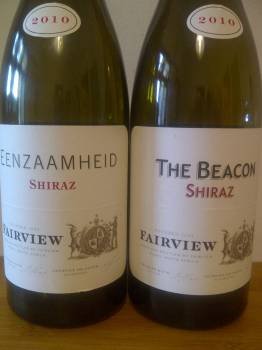 Fairview has perhaps been at it the longest and last night Eenzaamheid 2010 was up against The Beacon 2010. Both from grapes grown on shale in the district of Paarl, both R185 a bottle and yet wonderfully different.

Fairview The Beacon Shiraz 2010
Spontaneous fermentation in wooden fermenters, malolactic fermentation completed in barrel, 80% new and then maturation for 20 months in French oak, 40% new. Black fruit, some fynbos and intense pepper. Rich and full but balanced by bright acidity and possessing good grip, the tannins firm but fine. A wine of distinction.

The new vintages of the Signature range of wines from Swartland cellar Mullineux have been released and the Old Vines White 2021 and Syrah 2019 seem to have a particular...