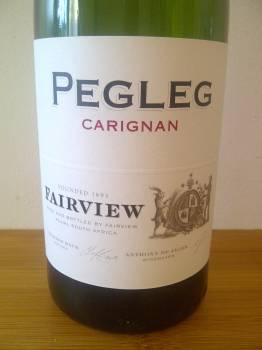 More than a curiosity.

Despite being late ripening and susceptible to disease, Carignan is widely planted in the south of France on account of being super-productive. Its origins are presumed Spanish and many will know it for the role it plays in the cult wines of Priorat. It typically makes wines high in acidity and tannins but old vines can produce pleasant surprises. Plantings in SA are low – some 84ha at the end of 2012.

Pegleg Carignan 2009 from Fairview (R100 a bottle) comes from a Perdeberg vineyard planted in 1972 bearing 2.8 tons a hectare (the wine named after grower Cobus Basson who lost a leg in a tractor accident). Fermentation was begun in tank and finished in old barrels where it was matured for 14 months.

It’s a really appealing if not profound wine – red cherry and strawberry as well as intense spice. The acidity is indeed snappy and the tannins present but by no means coarse. Youthful and remarkably light bodied for its 14% alcohol by volume.

The visionary undertaking that is the Old Vine Project continues to result in some wonderful wines, the latest to appear on the scene being the Ploegperd 2018 under the avant-garde...

And so to Woolworths and to cabernet sauvignon in my quest for wine under R100. Wine, that is, that we fussy types would find enjoyably drinkable or even better than...