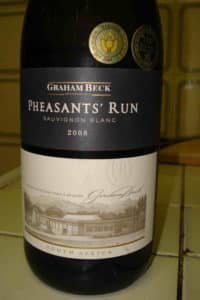 The Graham Beck Pheasants’ Run Sauvignon Blanc 2008 was among the winners of the 2008 Sauvignon Blanc Top 10 as convened by WINE magazine rating 4 Stars, and then remarkably was the only example of its vintage among the 2009 winners with a rating of 4½ Stars, the rest all being from 2009 itself

Clearly, it’s a smart wine but at the time of judging last year, I did have a sense that it was at its peak, with it starting to show some secondary character (think asparagus, tinned pea) that I don’t find too exciting.

Opening a bottle last night, I’m glad to report that the wine seems to have taken up position somewhere on the plateau of development and is still looking top-notch. Some pepper to offset the richer, more developed flavours and for all the wine’s fullness, a racy acidity.

With the entry period now open for the 2010 Sauvignon Blanc Top 10 competition, it bears mentioning that the maximum residual sugar of 5g/l specified as a condition of entry last year no longer applies.

Why was it ever implemented in the first place?  Official regulatory body, the Wine and Spirit Board define a “dry wine” as having an RS not exceeding 5g/l, and the argument could be made that if ever there was a wine that should be dry by definition, then Sauvignon Blanc is it.

There are however an increasing number of producers who think that the addition of a little sweetness (whether from a portion of botrytised wine or concentrate) makes for a more balanced wine, and therefore the RS ceiling is prejudiced against them. Fine, no RS ceiling and we’ll see if the sweeter wines stack up. Alex Hunt, purchasing director of UK wine shippers and wholesalers Berkmann Wine Cellars and judge at this year’s Old Mutual Trophy Wine Show is at least one observer who is sceptical about too much manipulation when it comes to Sauvignon…

The more mundane reason the ceiling was implemented was to limit entries towards keeping judging manageable. Last year, the competition attracted 226 entries, up from 186 in 2008 and 112 in 2007. However, it seems trying to tame the beast that is Sauvignon Blanc is a futile exercise and WINE magazine will now be adopting an attitude of “the more, the merrier”. Just don’t be a smart-arse and send in your Noble Late Harvest…

The Cuvée Clive is the top-of-the-range bottling from Méthode Cap Classique specialists Graham Beck made with Chardonnay from mostly Robertson as well as Darling, the base juice undergoing 100% barrel...

Wine magazine, the forerunner of Winemag.co.za, was launched in October 1993. The late Harold Eedes was publisher and Mike Froud, now of TopWineSA.com, was editor. On the cover was Pieter...