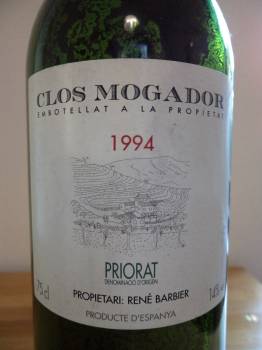 6 August was my late father’s birthday and since his death in 2008 sees the Eedes family gather to celebrate his memory. For dinner, a selection of gourmet sausage from Newlands delicatessen Gogo’s. The hearty food demanded wines of substance and so Guigal Hermitage 1997 followed by Clos Mogador 1994.

I presumed the Guigal would easily have enough weight and power to stand up to the strong flavours of the sausages but as things turned out, it was surprisingly delicate: red fruit on nose and palate, great freshness and fine tannins but outmuscled by what was on the plate.

The Clos Mogador was a much more suitable match, I’m happy to report. This is the label of René Barbier, generally considered the leading figure behind the revival of Priorat in Spain (the wines now made by his son, René Jnr). The region is known for its old-vine Grenache and Carignan, but Clos Mogador includes some Cabernet Sauvignon and Syrah and I gather sometimes even some Merlot, Mourvèdre and Pinot Noir. The 1994 had a noble rusticity to it with ripe dark fruit and a pronounced earthiness. Hugely concentrated, tannic and yet fresh, it easily tamed the grub.

Elim may be maritime but it’s still pretty close to the equator as winemaking regions go. It’s latitude is 34.6⁰ S compared to 45⁰ N for Hermitage, and  this being...